You are here: Home / The Writing On My Wall... / Why I Am Choosing To Forgive the Person Who Said a Cruel Thing About My Child

Both of my boys have birthdays soon.  I will only have one teenager left after that.  I have grown children.  And I can’t always protect them.

Shamefully, that has always been the case.  Oh, we have all done our best to make sure they were physically safe.  Emotionally, I couldn’t always be there to protect them from other people and their thoughtless words or actions.  That’s normal.  I know that.  We all have to learn to fix our own problems from time to time.  We all have to learn to deal with conflict.  To deal with disappointment.  To deal with bullies.  It’s a hard life sometimes.  And we can’t live it for them.

I can’t make them see sadness of the boy who worked his heart out and played almost as well as the boy who got a college scholarship in a sport, only to be cut from the team because there wasn’t “room” for any more players.  (Only to be replaced the next week with kids the coach knew.)  I can’t make them understand the hurt of the young girl who tried so hard and was passed over so many times, but was determined to keep trying no matter what.  I can’t make them feel for the little boy who was wheeled into surgery crying because some hospital staff member didn’t feel like he needed to be sedated at his size.  He still remembers it and I still get angry about it.  It’s another story.

I see it though.  In all of my babies.  (And they will be my babies until the day I die.)

I see how wonderful they are.  I see the raw, untapped potential.  I see their trials and their hurts and their triumphs.  I see the gift I was given the day that each of them came into my life.  And I still want to protect them.  To preserve their innocence.  To encourage their kindness.  I can’t though.  I can’t make those decisions for them.  I can’t protect them from life.

Someone recently said cruel things about my son.  The one I wrote about in my Beautiful story so long ago.  My heart hurt to hear it.  Not because I really care about looks or what other people think, but because I know it hurt him.

The mama bear in me wanted to hunt this man down.  I wanted to yell at him and berate him.  I wanted to physically claw his eyes out.  He obviously can’t see beauty anyway.

But I can’t do those things.  So I didn’t.  And I decided I had to forgive him.

I Forgive Him For:

I forgive him for being stupid.  Maybe no one ever taught him any better.  Maybe no one ever loved him for who he is and only his Adonis-like good looks (I’m just assuming he must be gorgeous and without flaws) are the only thing of value he has.  He has most likely always been surrounded by stupidity.  He will most likely remain stupid for the rest of his life.  So I forgive him.

I forgive him for being cruel.  Cruelty generally begets cruelty.  Most especially if you are stupid (see above).  He most likely suffered cruelty from someone at some point and instead of realizing it was a reflection on their character instead of his, he thought it was his cue to be cruel as well.  He obviously doesn’t know this makes him a bully.  Most of us have been cruel at some point.  Most of us have said something mean or unwarranted.  I know I have.  The difference is, I feel guilty about it.  This man most likely doesn’t suffer guilt about anything (again, the stupid thing).  He might regret his actions one day.  It will most likely be much too late.  So I forgive him.

I forgive him for thinking he is funny, justified, witty, cute, clever or one of the “cool” kids.  He is none of these things.  I suspect he never was.  Then again, being stupid is much like being drunk.  You don’t know you aren’t fabulous and you are generally surrounded by people who are in the same state as you are–they don’t know any better either.  He probably doesn’t realize that where he is in life is probably as good as it will get for him.  He doesn’t realize that the words he said aren’t original.  He doesn’t realize that while he is here living his not-even-mediocre life, my child will be doing wonderful things.  Or maybe he does realize that and his hatefulness is out of jealousy.  So I forgive him.

My children don’t really need me to stand up for them.  They are practically grown.  They are strong and intelligent.  They don’t need me to, but I always will. 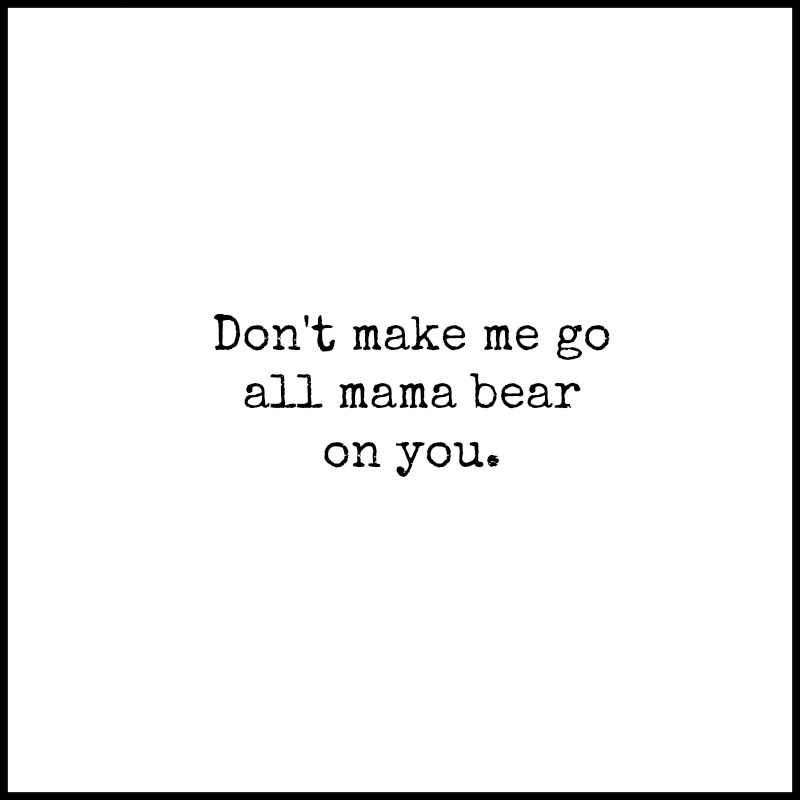 « We Have a Winner for the Clear the Clutter Challenge $25 Gift Card Giveaway!!
That One Mom’s Weekly Wrap Up–Beach Week »