In truth, I would’ve preferred to be able to devote time to everything, but I’m still not up to par health-wise.  I feel like I’m improving (most days), so hopefully it won’t be long until I can juggle multiple things.  There are so many ideas swirling around in this brain of mine and it’s frustrating not to bring them to fruition!

The house did get a lot more decorated than it did last year.  Having use of both arms makes a huge difference!  I’m not nearly as weak as I was before either, although all of the Christmas sweets I’ve been eating haven’t done me any favors.  Still, I was excited to get so much done and despite a few boo-boos, I thought it looked pretty.

We actually had trees in several rooms this year.  The ultimate goal is to have one in every room, but I just haven’t had space or energy to do that yet.  The Super Trooper was super excited to get his Trooper Tree back this year. 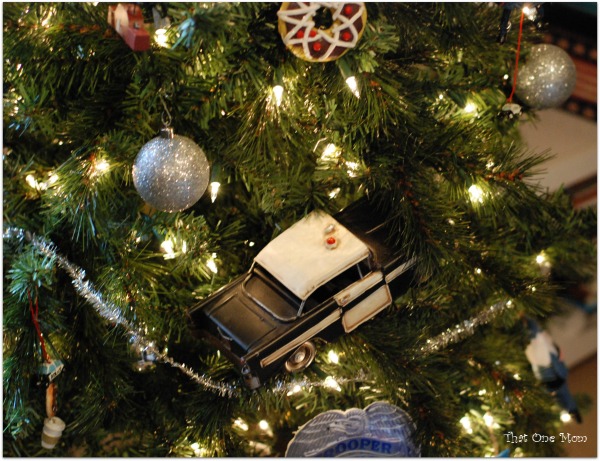 I didn’t bother with all of the patches, but I found some garland and ornaments at the dollar store that filled in a few bare spots.  Most of the decorations have been collected through the years and some were just collectibles he had sitting around.  It turned out pretty cute, but next year I’ll probably add more to it.  (Yes, that’s a pig under the tree.  Everyone here has a pretty good sense of humor!) 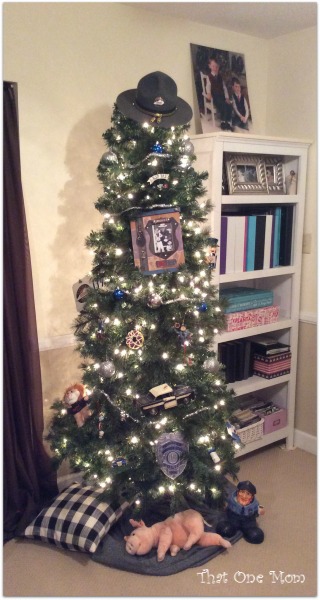 My baby girl had two trees this year–one was a mermaid tree and the other was full of mostly pink or pastel ornaments she’s collected over the years.  I did help a little, but she did most of the decorating herself. 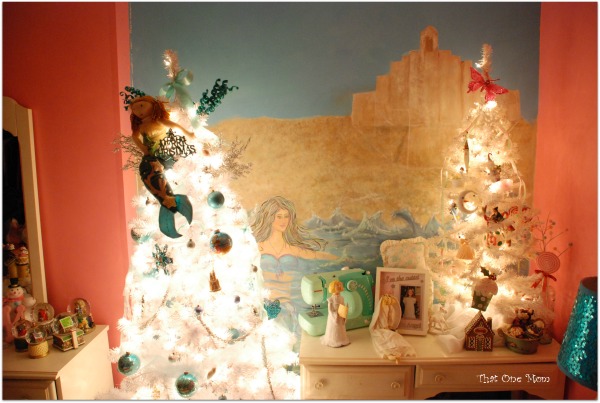 My sweet momma started that mural on the wall.  She’s an incredibly talented artist.  We had some ideas about how to finish, but we never have.  I offered to paint over it, but Spizzie swears she’s not too old for mermaids and when she moves out she’s taking the wall with her!  I’m not sure how that will work out. 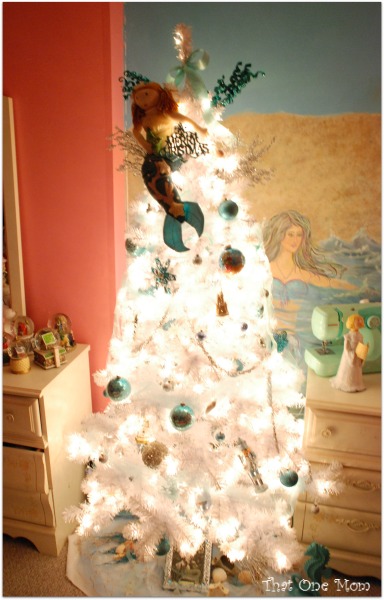 The hallway is always one of my favorite spots to decorate.  I do so love that cabinet!  Some of the decorations are like last year’s, but there are a couple of new additions. 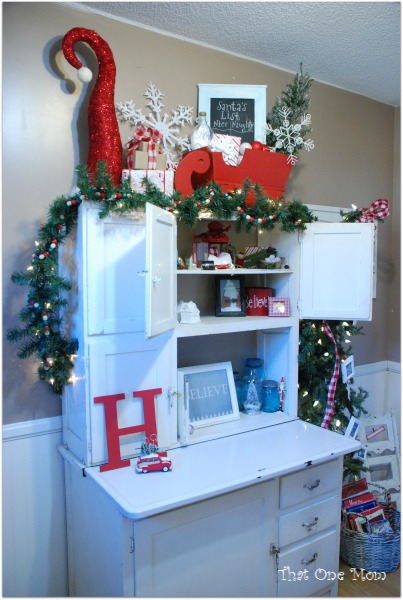 The little tree got decorated with photos and my momma’s crochet snowflakes again.  Sometimes it’s best not to mess with perfection! 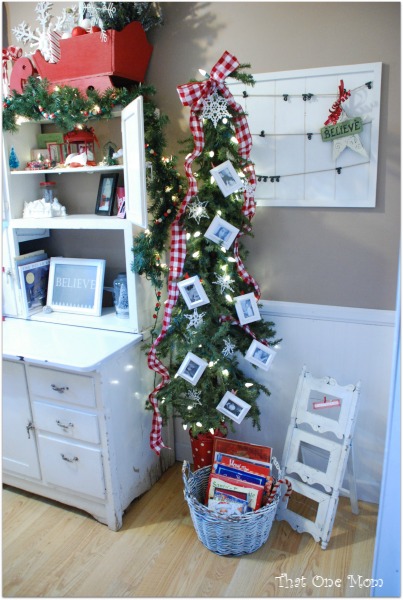 Spizzie also drew the design on the chalkboard again.  I basically just tell her what idea I’m going with and she picks out something and freehands it.  Last year was a “Let It Snow” theme. 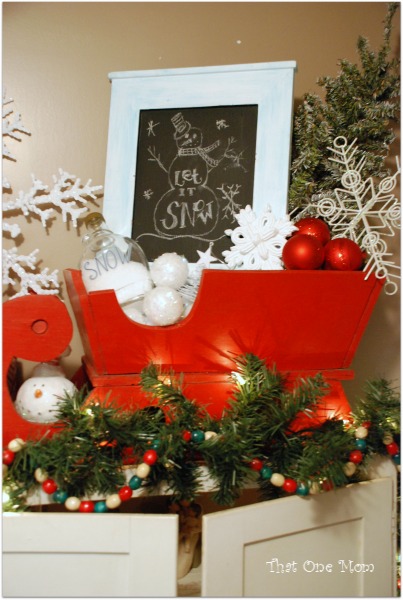 This year I wanted a naughty list, but she couldn’t decide who should be on which side.  I tried to convince that my name was the only one that needed to be on the “nice” list, but she didn’t fall for it.  Both sides were blank! 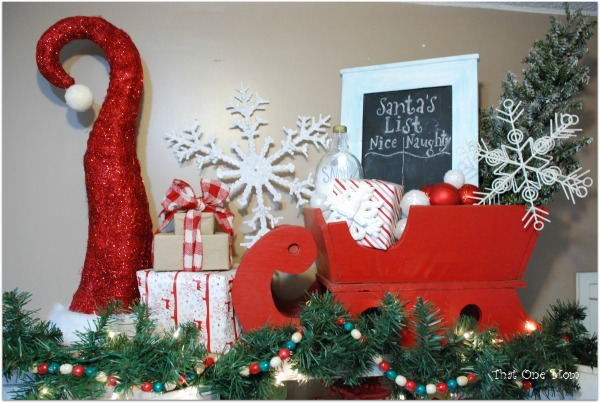 The Nativity is new to the hall this year.  It’s always a struggle trying to find the perfect spot for it.  It’s also a struggle trying to figure what to do with that weird window.  I can’t completely block it or there would be no natural light in the hall at all.  The Nativity was a perfect fit…I even added some fairy lights to give it a little glow.  The piano is on loan from my sister.  It’s not exactly my style, but my kids sure can make it sing! 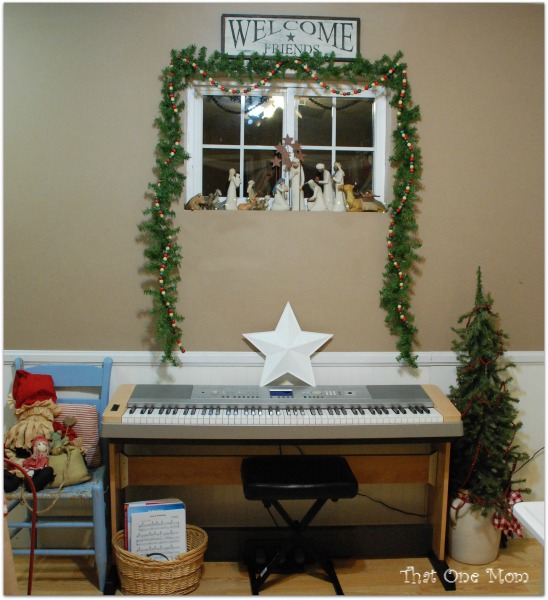 This little blue chair was in my great-grandmother’s house and my aunt gave it to me when she passed away.  My Momma decorated with that Santa doll forever.  I was very excited when he became mine.  Those are definitely two things that will always have a place as far as I’m concerned! 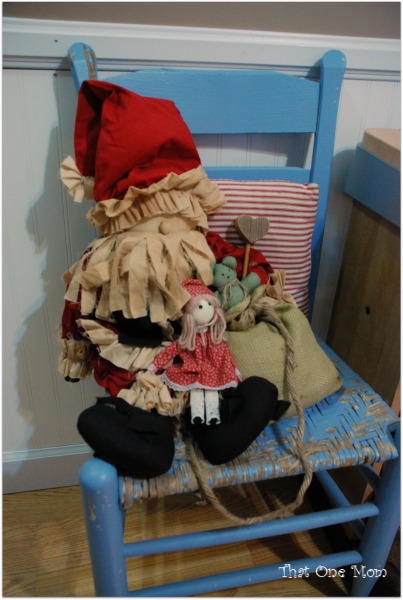 This year’s Christmas decor included a fairy house.  I’ve wanted one of those forever!  The original plan was to decorate both shelves–sort of an upstairs and a downstairs–but I lost my imagination and quit with one.  (Although I did make that little pillow myself!  It’s just batting folded up and wrapped with some wired ribbon.  Glue the ends so that it stays.)  Hopefully, someone will help me with ideas and I can keep it up year-round. 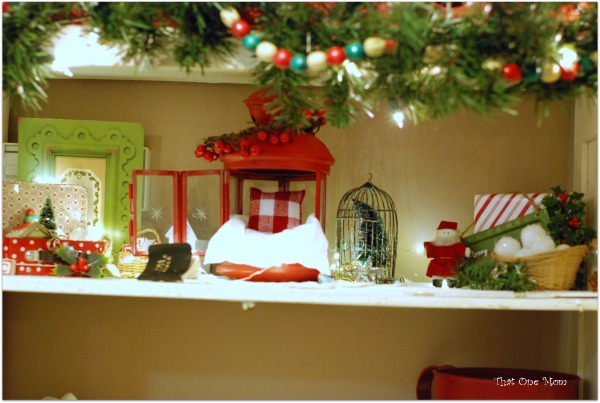 The kitchen got a lot more attention than usual this year.  There were actually several decorations that didn’t even get photographed.  I got tired…sorry!  The fridge was harder than usual.  We got a new one and we were in such a hurry to get the food in before it spoiled that we didn’t notice it needed to be leveled.  So everything I put on it kept sliding backward.  It was a pain to keep moving stuff back. 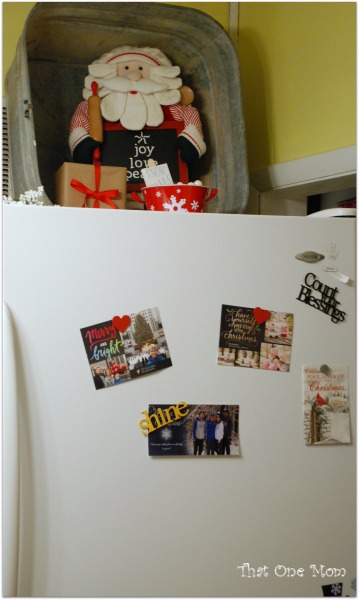 The shelves turned out super cute.  I love my tobacco stick star the most!  Super Trooper made it for me and I just dry brushed some white paint on it.  There is also a little bit of a gingerbread/candy theme going on.  That’s pretty appropriate for the kitchen, don’t you think?!? 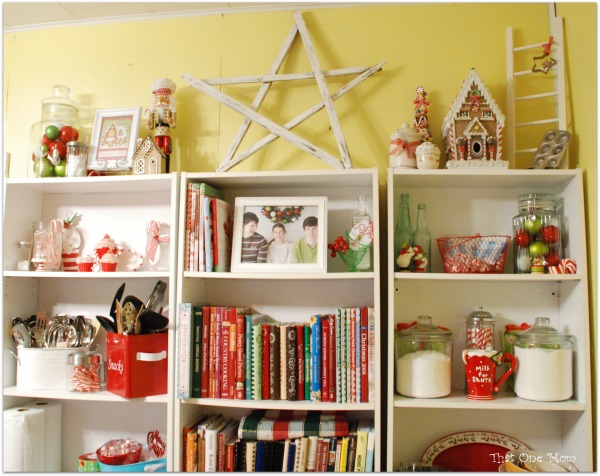 This is one of my favorite vignettes on the shelves.  I love all of the red and white! 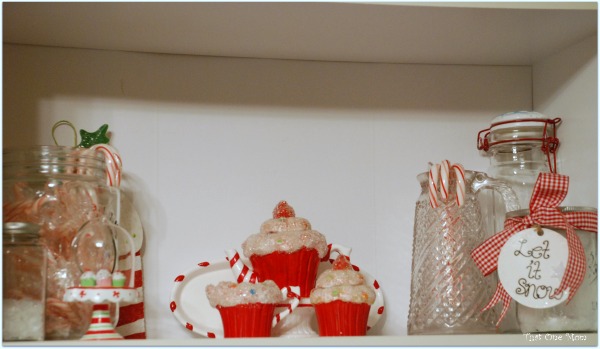 This is another favorite spot in the kitchen.  We have these three tiny windows that aren’t quite centered the way they should be.  It’s hard to decorate them and make them look cohesive, but I usually get at least one right.  Hey, one out of three ain’t bad!  I love the farmhouse look of this one.  Since we technically live in a little farmhouse… 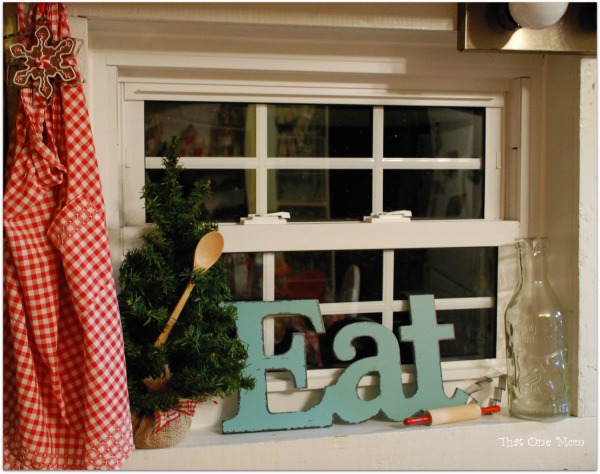 Our living room is actually one of the hardest rooms for me to decorate.  There are so many doors and very little natural light.  I’m hoping to replace the furniture and rearrange everything sometime in the future.  In the meantime, we work with what we have!  The shelves are kind of fun.  I do add different touches, but if I hit on a design I like, I leave it alone! 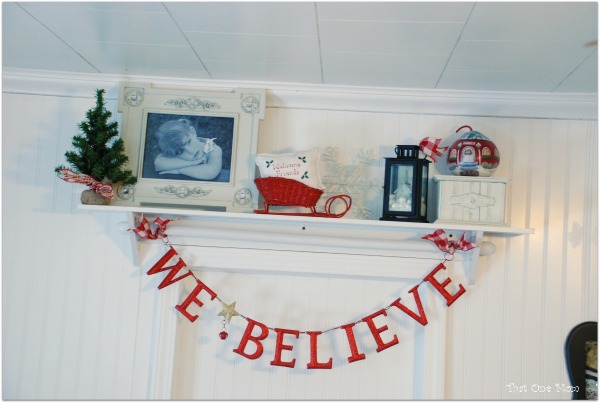 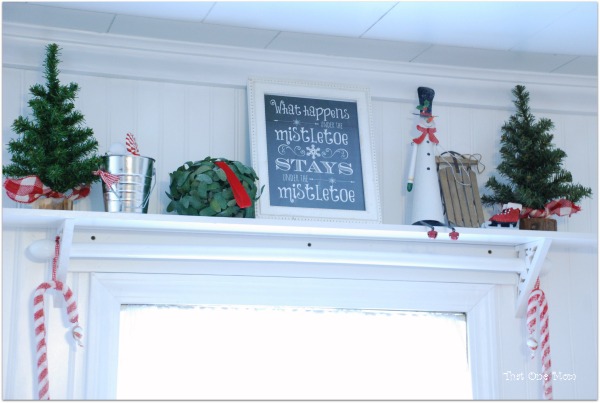 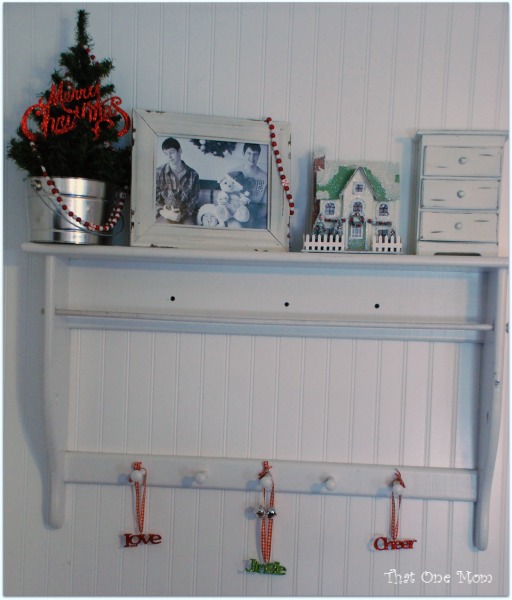 Shew.  Sorry about the lighting on that last one.  It’s in one of those dark spots.  Sometimes no matter what you do, you can’t fix it!  Much like the computer desk.  It is wedged up against the couch and while I’m very thankful to have it, I was at a loss at how to cover the back. It’s pressboard and not painted, so it wasn’t very pretty.  I finally settled for a curtain and some greenery with ribbon.  It wasn’t perfect, but it served the purpose.  The framed print I definitely love.  Those are the lyrics to one of my favorite Christmas songs by the Martins.  Sometimes I make things just for myself! 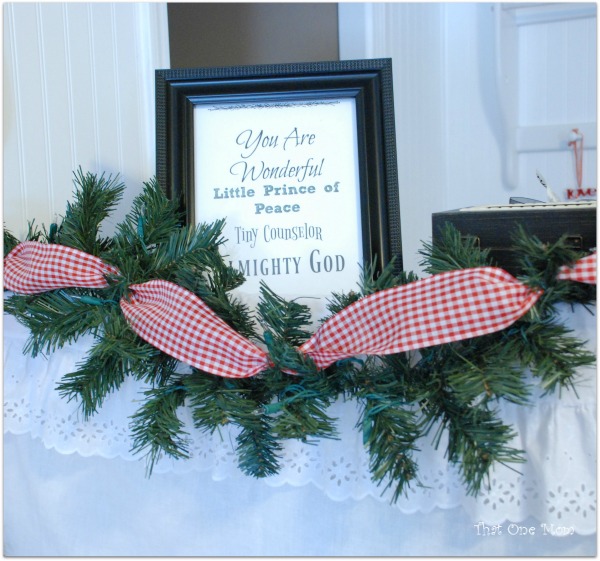 My daughter was kind enough to let me use her old typewriter again, although she did let me know she’d be angry if I got greenery in it!  I made the “Dear Santa” letter too.  The typewriter wouldn’t type big enough!  And of course, we had to put out Santa’s key. 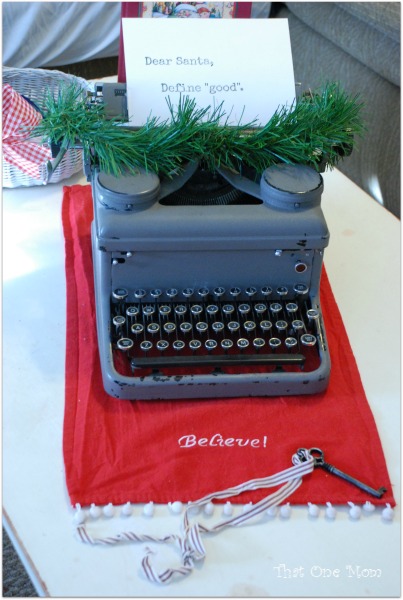 This white ladder is actually the one my husband built for our boys’ bunkbed when they were small.  It makes a great place to hang blankets and prop up pictures.  (That’s me with two of my three.  My oldest rarely shows up for pictures!  He’s very handsome so I don’t know why.) 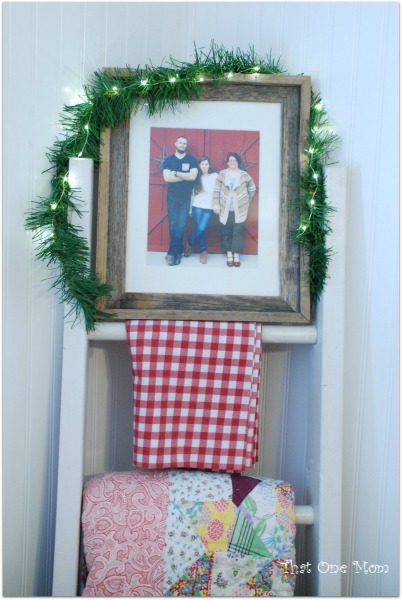 Of course, the stockings were hung!  Filling the stockings is one of my favorites.  I felt like they were a little sparse this year, but I gave out on shopping before I really got finished.  I’ll make up for it next year. 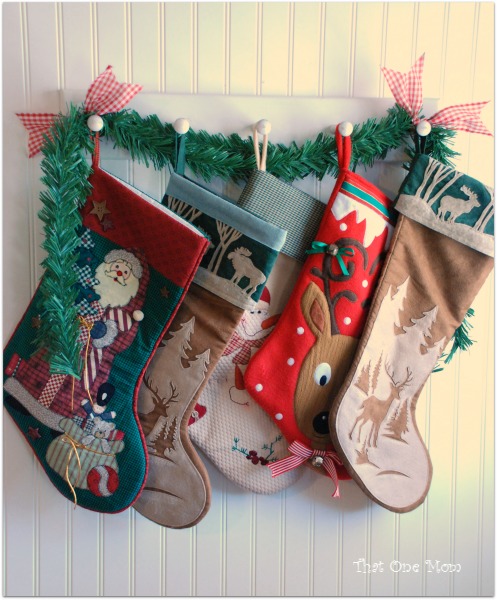 The entertainment center is definitely my least favorite.  I can’t stand that thing.  The Super Trooper is either going to build us a new one this year or he’ll have to sit on the floor to see the television.  It’s going one way or the other!  I did like having somewhere to put that mirror though. 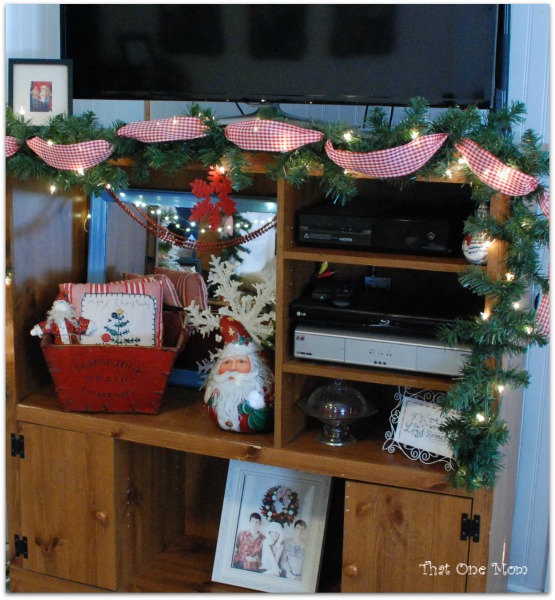 Last, but not least inside the house is the tree.  We finally got a flocked one.  It’s gorgeous, but FYI they are a booger to decorate!  Anything with a ribbon will require the addition of a hook.  And you can’t use flimsy hooks either.  The white does fall off a little, but not nearly what I expected so that’s good.  Other than that, I’m in love with it. 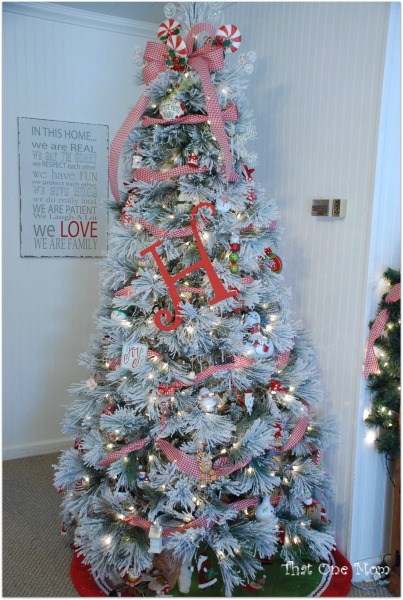 The front porch did finally get decorated.  I did a little bit of a rush job and it was only after I got it up that I realized that I didn’t put any lights out.  I added one strand to the tree afterward, but it was too much of a hassle to try and hook them up.  Also, it looks great in person, but no matter what I did the pictures turned out blue-ish.  I even adjusted the white balance on my camera, but I’m no professional.  Anybody have any tips??

That’s pretty much it.  I hope you enjoy the decorations and they will spark some new ideas for you next Christmas!  It was a lot of fun putting them up and now the packing away begins.  Oh joy.

As always, come back soon (and often) and see what’s new! 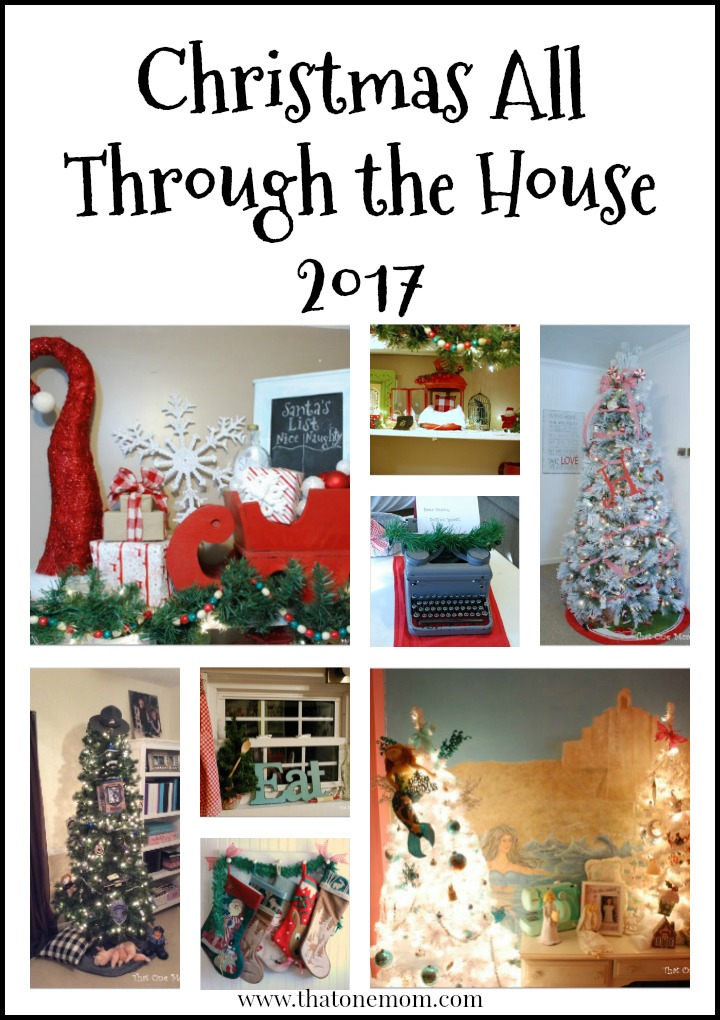