A couple of years ago, I watched an episode of  a cooking show that changed my life! That might be a bit of an exaggeration. It didn’t change my life, but it did change the way I cook turkey…that could maybe count as life-changing.

Prior to that year, I had only cooked turkey a couple of times and it was a little bit, well, lacking. Most of the time, I left the turkey cooking up to the grandmothers. Ham is more my thing anyway. Did I tell you I make a mean ham? Sorry…I got sidetracked (but I do make good ham).

Anyway, the host did a fabulous thing to her turkey. She brined it. It wasn’t as if I had never heard of brining something, it’s just that it sounded so complicated. They made it sound so simple. And it looked soooooo good.

So the next turkey dinner became my project and I nailed it! The flavors were amazing and the skin was nice and crispy. It was fabulous and I now have three ways I prefer my turkey:  brined, smoked, or deep-fried. Since that time, I’ve tried it on chicken legs as well. It’s pretty darn good.

There are lots of recipes for Apple Cider Brined Turkey out there. I know because I’ve read a bunch of them! That’s fortunate for me because there is a whole story behind how I modified the cooking show recipe to make it my own.

It goes like this:  I bought a turkey–not a breast, a whole turkey–which I was going to cook for my Momma’s birthday. I let it “thaw” on the counter for a little while and I let it sit in the fridge for almost two whole days. Now please don’t lecture me if that is not the proper protocol for turkey thawage. It didn’t work anyway.  Two days later and the thing was still almost a solid lump of ice. Also, while the turkey was trying to thaw, my internet went out. FOR THREE DAYS. For a blogger, that’s almost tragic. It wouldn’t have been a big deal, except that I have a nasty little habit of not writing down recipes that I use from the internet. This isn’t the first time this has happened to me and you would think I would learn, but I haven’t. And when the turkey was thawed, I had no recipe and my Momma had to go home. Boo.

I wasn’t about to let a 13-pound turkey go to waste though and figured I had committed enough of the recipe to memory that I could recreate it. Eh, close…but that only counts in horseshoes and hand grenades, right? I left a few things out and doubled a few things and tripled a few things and it turned out even better than before. I even got the ultimate compliment from Spizzie.  She said, “This is awesome!  And I don’t even really like turkey!” It must’ve been good, because the two of us at a good half of the breast for supper–with dressing of course! 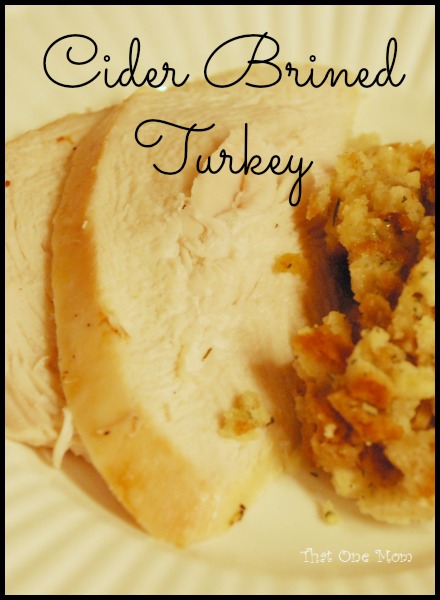 I don’t have pictures of the brining process or any of the preparations really.  And it was only after we had butchered it that I thought to snap any pictures at all.  I’m sharing it anyway!

Fresh Thyme–handful, sprigs and all

Mix everything but the turkey, butter, and pepper in a large stockpot and heat until sugar and salt melt. Stir and let cool. Add your turkey. If you are using a breast instead of a whole turkey, you can omit the water altogether. I just added enough to cover the turkey. (It was a BIG turkey.) You can put the turkey in a bag with the brine, but I just left mine in the pot and rearranged the entire contents of the refrigerator until I made it fit. Let the turkey soak in the brine overnight.

When you are ready to cook, preheat your oven. Drain the brine off of the turkey and pat dry. Here’s where the original recipe and I differ most. They used olive oil and salt and pepper. I gave my little previously feathered friend a butter massage. Everything’s better with butter, y’all!! I also didn’t add any extra salt, as I was terrified that I had oversalted the brine already! (The whole “from memory” thing…) I did sprinkle it with pepper, but not so much as to induce a sneezing fit. I also took some of the herbs, onions, celery, oranges, and garlic and stuffed them inside the cavity of the turkey. Then I wedged some of the herbs under the skin. That part is hard after the buttering. Have you seen the commercial where she’s cooking and the turkey flies out of her hands and through the window? Yeah, something like that. You should probably do the herb thing before the butter massage.

Now, there are a gazillion different opinions on the best way to cook a turkey, so you do whatever you like best. I preheated my oven to 350 degrees and cooked the turkey for 15 minutes per pound. I started out with an aluminum foil tent for the first hour or so and then removed it so the skin could get good and brown and crispy. You can kind of see that here…on the parts I hadn’t already eaten the skin off of. Oops. 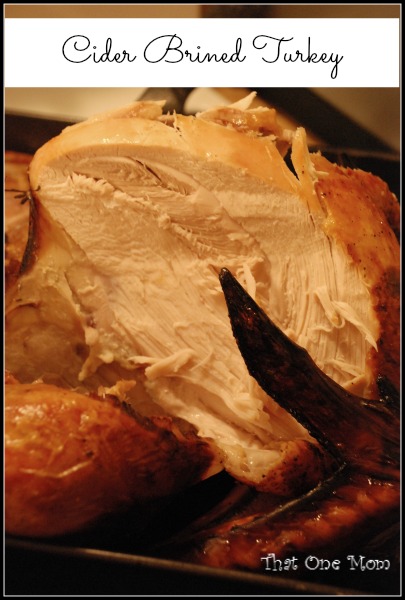 It was so good. Crispy on the outside, tender and juicy on the inside. You could do a lot with the leftovers too, if you have any!

On to my Thanksgiving Menu. If I am hosting Thanksgiving, I have a set list of things that I really, really like to eat with my turkey. (And ham, if you are having that as well.)

I think that list is long enough. These dishes all make great leftovers. They are also pretty similar to what I cook for Christmas dinner at my house. I’m really looking forward to that!