Halloween costumes are a bigger deal than I ever knew! I’ve looked at a ton of costume ideas in the last couple of weeks and some of them blew my mind with their creativity. We’ve had some really interesting costume choices around here through the years, as well. Some were store-bought and some were homemade, but they were all cute. (Because my kids were wearing them, you know!) Some of my favorites I couldn’t find pictures of (I know I have them, I just couldn’t find them.) Spizzie’s first Halloween she was a cowgirl and her second she was a sweet little fairy. And one year the boys were Walker, Texas Ranger and wait for it…Walker, Texas Ranger!!! That was the best. Of course, the time Sunshine Boy dressed up as the Super Trooper was great too!

The Super Trooper and I were supposed to go to an adults-only Halloween party this weekend, but we opted to stay home with the kids. I pinned a whole bunch of costumes beforehand and even picked out one that I liked, but he refused to dress up as the Birthday Girl and her Pinata. I can’t for the life of me figure out why.  ; ) Since we’re not dressing up, I thought I’d share some Halloween Costume ideas we’ve used in the past.

Two Ninjas and a Glamour Puss 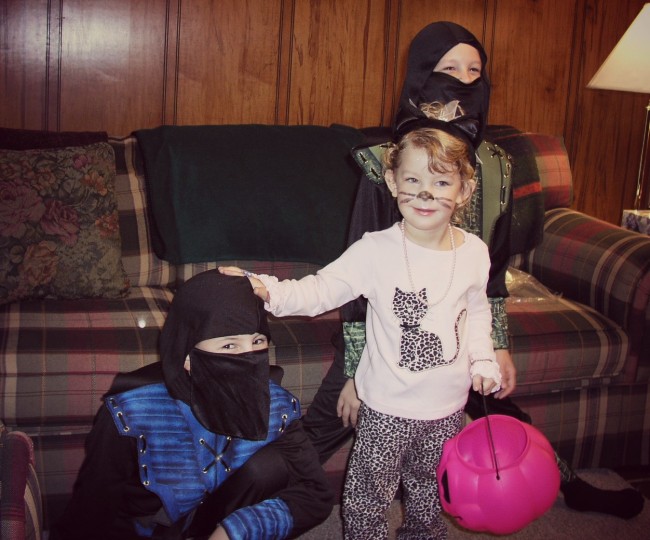 My children have had some store-bought costumes in the past. The boys wanted to be Ninjas that particular year. I have always refused to spend a fortune on Halloween costumes. For one thing, they don’t wear them that long and well, they are expensive!! So we usually set a limit and try to find things on sale. Spizzie was a Glamour Puss. She already had that outfit, so I added some kitty cat ears, a tail, whiskers, some pearls, and lots of glitter. She was a cutie patootie and it was precious listening to her tell everyone what her costume was. I miss the days when they mispronounced everything in those sweet baby voices. 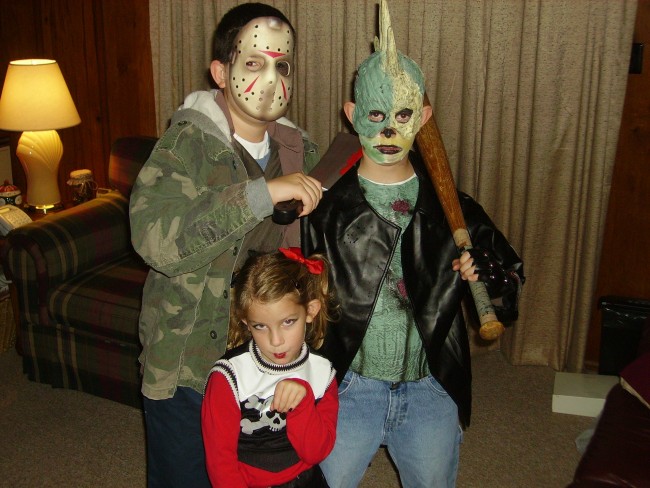 A few times, they have had costumes that were out of my budget. Those were the times when my sister (who spoils them mercilessly) bought them. It goes like this:  Sissy pulls up a website. Children pick out what they want. She orders it. Boom. It gets delivered to our house!

This particular year they wanted to be scary. So we had Jason Voorhees, a Punk Zombie, and the Cheerless Cheerleader. The boys didn’t talk most of the night. Spiz just kept walking around saying, “whatever” in that I’m-so-bored voice. I think she was giving me a taste of what the teenage years might be like!

Meet Sacagawea!! At this point in time, the boys weren’t dressing up for Halloween as often. Spizzie came up with this idea all on her own. The actual outfit was one that my Mother-in-law sewed for one of her children many, many years ago. My Mom had bought some moccasins and the little purse. My sister came up with some accessories and I sewed the “papoose.” (She already had the doll.) Also, she got highly offended at anyone who called her Pocahontas. As a matter of fact, she maintains to this day that she was Sacagawea and no other Native American! 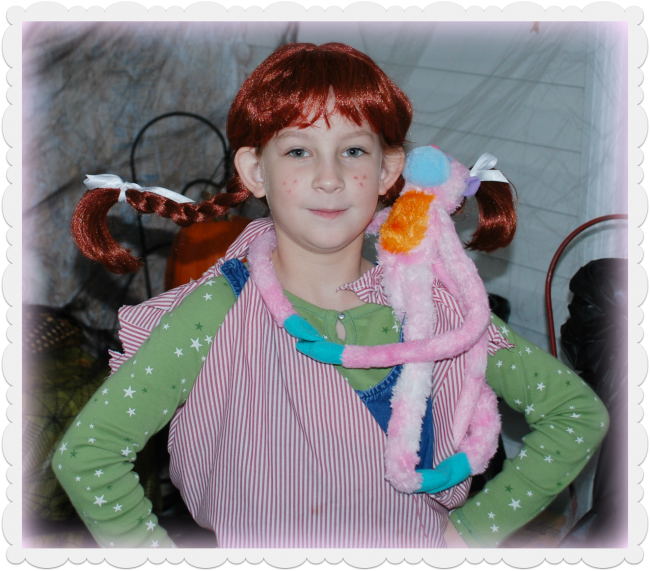 This is Pippi Longstocking and Mr. Nilsson. (Spizzie really likes literary and historical characters and at one time, wanted to name her future daughter “Pippalotta Windowshade.”) I spent less than $10 on the wig (on sale) and five dollars on the jumper. I just bought the smallest adult denim jumper I could find at Goodwill and cut it down. The “apron” is one of Super Trooper’s old shirts that I cut up and she had the rest of the outfit, including the stuffed monkey. This was a lot of fun to do! Just for future reference, hobo and gypsy costumes are easy to put together in this same way!

Believe it or not, this costume was almost completely homemade. My sweet Momma had some really pretty fabric someone had given her, so she made a skirt and cape. Then she took an old lace top of mine and made it into a top for the Little Witch. We topped it off with a hat bought on clearance the year before and a $1 broom! Since the skirt had elastic and the shirt had ties at the back, Spizzie was actually able to wear it again…two years later. My, how she changed!

The year in between was a store-bought costume. I ordered the costume online using coupon codes and bought the wig on sale–the whole thing was less than $30. The accessories came from my Mom and sister (they are so handy) and I did the make-up. The information session about Cleopatra that she shared with everyone was all hers!! 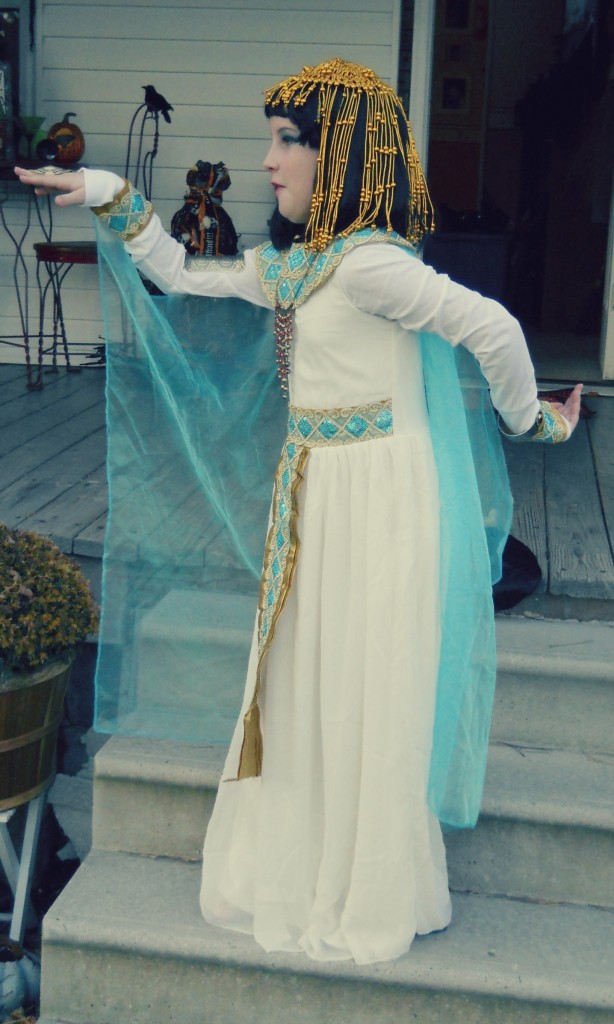 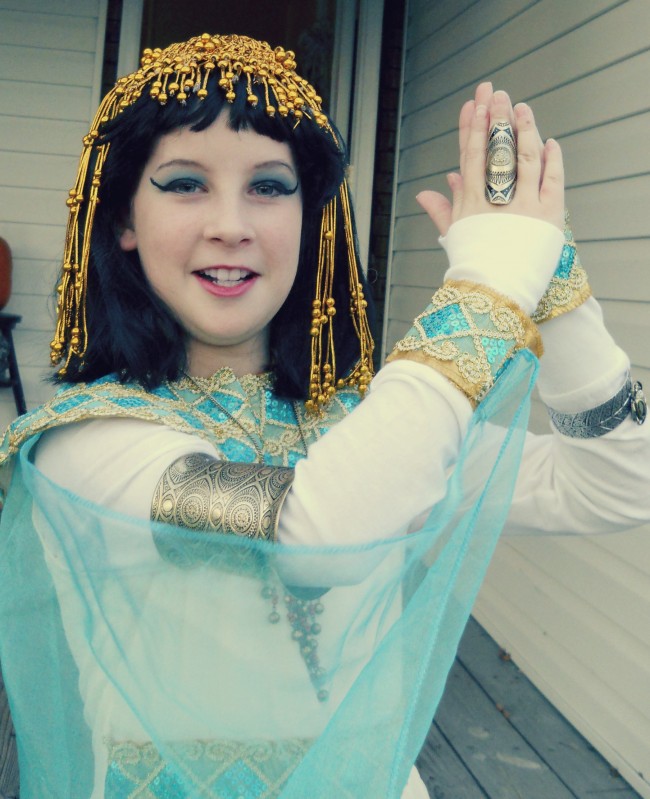 Of course, Spizzie isn’t the only who dresses up for Halloween.  Her brothers get in on the act occasionally.  (So do her parents, but I will save those pictures for later…or never!!) 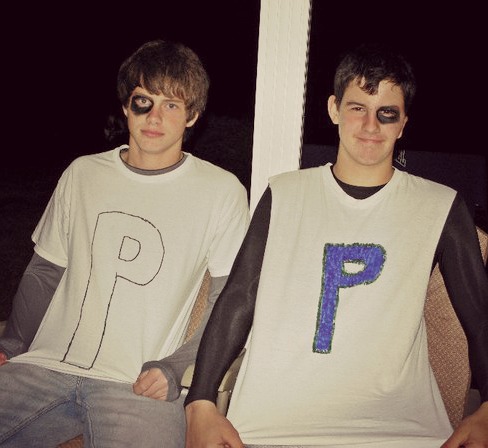 We went to a party and Sunshine Boy and his Bestie needed a last-minute costume. So we drew P’s on their shirts and blacked their eyes. Voila…The Black Eyed P’s!!! 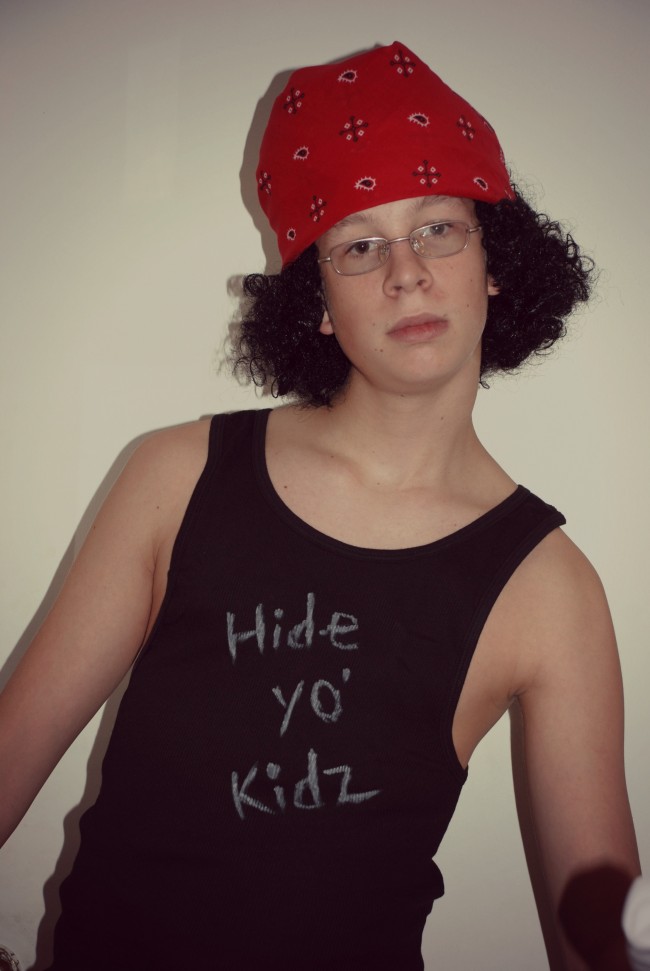 Funny Bubby needed a costume too, but he came up with his own. He is a MAJOR YouTube fan. So Hide yo’ Kidz, Hide yo’ wives…

These are just a few of the costumes my children have had on! There is always a 50’s day or a Nerd Day or a Decade Day or some other thing that they have dressed up for. I need to find those pictures, because I might need the blackmail material!!

So tell me…what are your favorite costumes?? 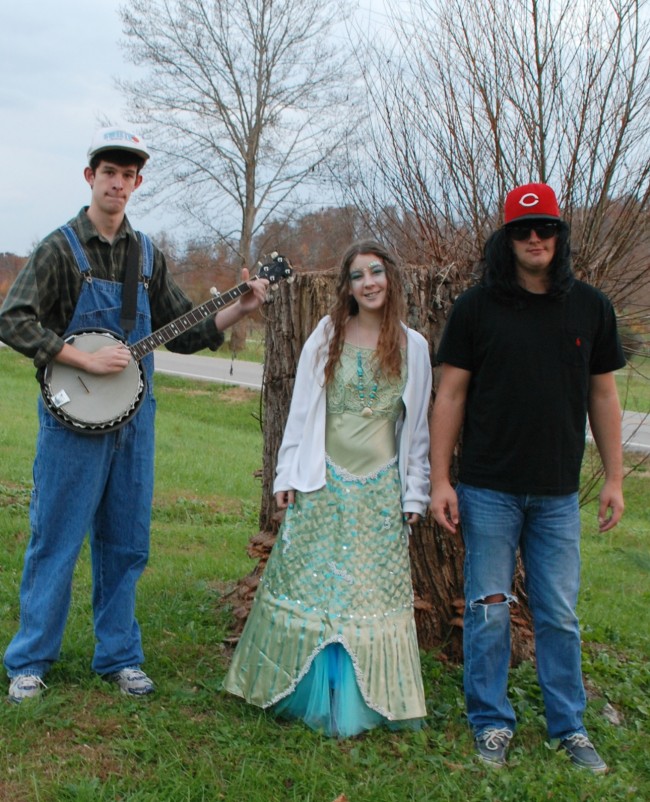