You are here: Home / Holiday & DIY / Craftiness / I Made It Myself Monday: Front Door Wreath

I’ve been meaning to make a new wreath for my door since Christmas.  (It’s possible that I’m just a little behind on my craft projects.)

During a Mom’s Day Out with two of my really good friends, we visited a local discount store that has started stocking lots and lots of craft supplies.  I had to refrain from spending a fortune, but I did leave with some burlap ribbon at a really good price.  And we all three left with the intention of making something beautiful!  Unfortunately, I sometimes let life get in the way and put off the things I enjoy until “later.”

I got tired of waiting though and decided that “later” was going to be now!  Seeing that burlap ribbon just sitting there was really gnawing at me.  So I dug through some Christmas decorations until I found an old wreath that needed to be revamped.  The glue was pretty brittle, so it wasn’t very hard to pull off all of the greenery, ribbons, and berries.  Then I wiped it off and spray painted it with white satin paint.  I put three coats on the front, but only two on the back.  I love quick-dry spray paint, by the way!  I had bought the big letter H a while back.  It’s just chipboard and it took the paint really well.  I put two coats on just to be sure and I had to go back and touch it up when the wind blew the sheet I was painting on over on top of it. 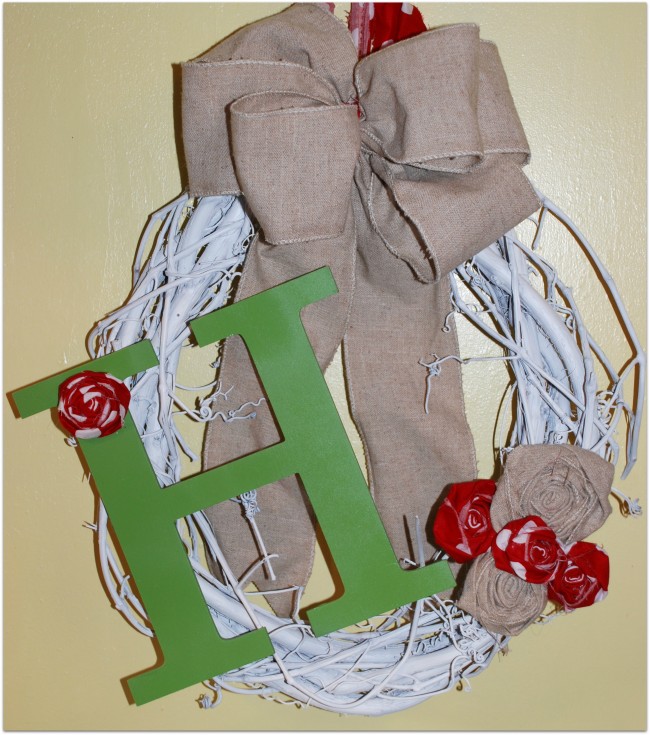 The bow on top is just burlap that I tied with some leftover fabric (because I didn’t have pipe cleaners).  I have a Pinterest board that has all kinds of bows and I just scrolled through a few until I found something similar to what I was looking for. The instructions for the fabric flowers were courtesy of Jessica over at Cherry Street Cottage.  My flowers aren’t nearly as good as hers, but for a first effort, I think I did alright!!

I just laid the wreath flat and arranged and rearranged everything until I found the right combination.  Then I glued it all on with a glue gun and put a little piece of wire around the H, just in case the glue didn’t hold.  It was so easy, I’m not sure why I didn’t make the time to do it sooner.  : )

To say my crafts don’t always turn out well is a total understatement, but I was soooo very pleased with this wreath.  Unfortunately,  I can’t hang it on the front door until I either (A.)  find the hook I used at Christmas or (B.)  go buy a new one.  Until then, I’m just going to leave it propped up in the living room for the family to enjoy! 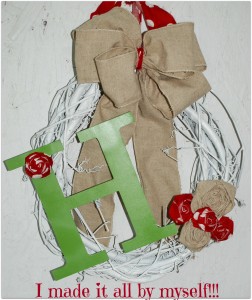 « College Move-In Day: “Call Me If You Need Me.”
A Little Christmas Every Day »