You are here: Home / Because I Said So! / If She Says There Are Mermaids…

I know I talk about her a lot and I don’t want you to think my boys are not equally as important to me.  This really isn’t completely about any one particular child of mine.  Please be patient with me.

Again, my daughter loves mermaids.  When she was about 8-years-old we took a trip to the beach and she spent much of her time staring out into the waves in deep concentration.  I really didn’t find this odd, because I’ve done the same thing more than once (the ocean soothes me) and have even seen my boys look at the water as if they were contemplating the universe.

Occasionally, she would smile or nod or even giggle a little and I finally asked her what she was doing.  And that’s when she introduced me (by way of description) to her mermaid friends.  She gave me names and colors and hobbies and even a list of their favorite foods.  She was so convinced that there were mermaids in the water that she told other people all about them and two years later, those same mermaids journeyed from the Atlantic side of Florida to the Gulf just to visit with her.  And no matter how many times someone told her there was no such thing, she insisted that there was. 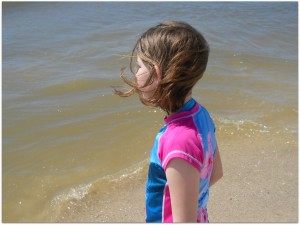 Fast forward to this year and a brilliant plan to dress up for a Middle School Choir/Band Halloween dance…she wanted to be a mermaid.  So we dutifully studied the internet (where she declared that some of these people knew nothing about mermaids) and came up with the idea of “reconstructing” a $5 dress from the local Goodwill.  She was very excited about this and I was very proud of myself for actually getting it finished.  I took that champagne colored dress and with some fabric dye, glitter paint, pearls, rhinestones, tulle, hot glue, and back pain, I made a masterpiece!!   And the dance was cancelled. 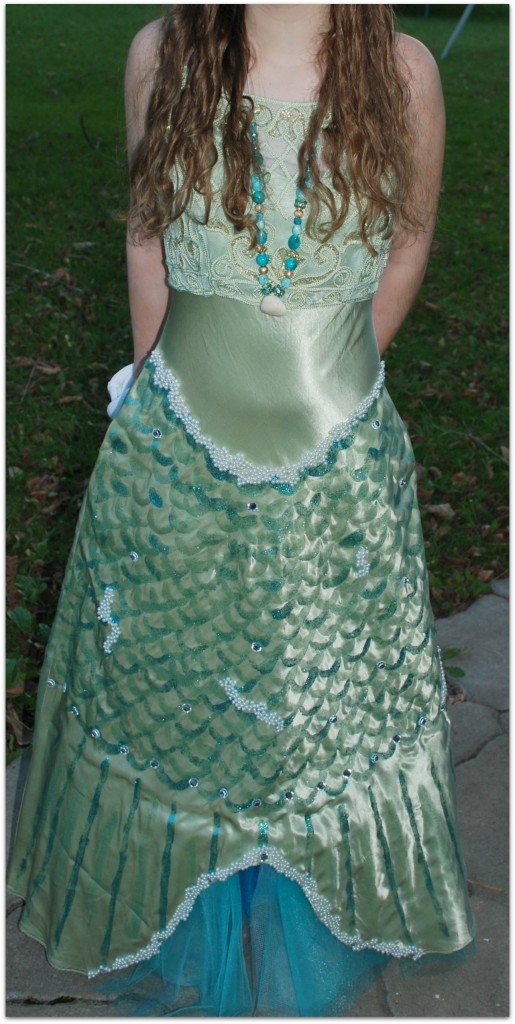 Fortunately for us, our friends hosted a “Post-Halloween” Costume Party.  (Meaning, they are super busy just like us and didn’t have time to do it before Halloween.)   So Spizzie got to wear the dress and I did a pretty decent job on her hair and makeup—especially considering I generally suck at hair and make-up. 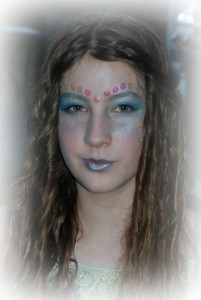 But that’s not the important part.  The important part is when she looked at me and said, “I know The Brothers (because that is what she has always called her brothers) don’t believe that mermaids are real, but they are.”  And this is the part that made me both happy and sad.  Happy that she still holds a sense of wonder and sad that for some reason this world dictates we lose a lot of that wonder if we want to be considered normal adults.

My boys are 17 and 18 now, but I still remember two little boys who would make up stories for me.  Who would sing nonsense songs and make up knock-knock jokes I didn’t get.  I remember when my oldest used to dedicate all of his songs to his “old grandpa down in North Carolina.”  Technically none of our family has lived in NC since I was a girl, so I don’t know who this was!  But it would make me laugh every time, so I suppose that had something to do with it.  Those little boys believed in mermaids and dragons and friendly spirits. 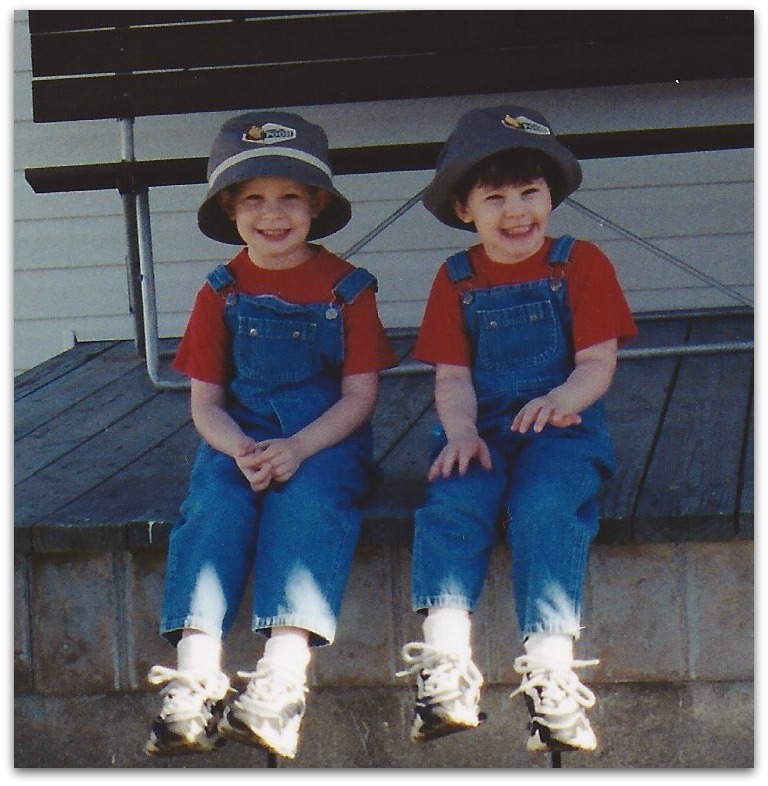 I remember when my oldest was being made fun of for his belief in Santa.  He asked his friends if they believed in God.  Some of them said yes, so he asked them if they had ever seen God.  When they answered no, he said, “Well just because you’ve never seen something, doesn’t mean it doesn’t exist.”  I thought that was awfully profound for a 10-year-old! 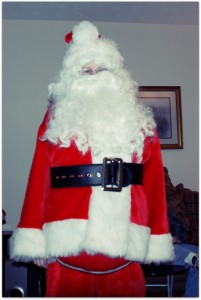 And I remember when my sweet middle child had his first surgery on his ear.  The pastor and his wife brought a little angel statue and we told him it would watch over him.  The surgery was long and stressful and I know he was in quite a bit of pain.  He finally got enough medicine to relax and had been asleep for a while when he suddenly held his little hand up in the air.  It looked just like he was grasping someone’s hand and he had the biggest grin on his face.  After a few minutes, his face relaxed and his hand went back to his side and he slept for a long time.  When he finally woke up, I asked him about his dream and he said, “That man just held my hand and told me I was going to be okay.”   He looked at that angel statue a lot while we were there.  Some people would say he was just dreaming, but I know what he believed that day…and I believe it too.

Faith, belief, imagination, wonder…my children have all possessed tremendous amounts of these.  And I hate to see any of it fade.  It’s heart-breaking.

We give our children gadgets and toys and let them do what’s “cool” and “popular.”  We want them to be the best and get ahead and at the same time, we let the world tell them that they can’t.  And sometimes we tell them that they can’t.  Even without meaning to, we sometimes discourage them because we think their dreams or ideas are a little silly.  For instance, my youngest son once told me he wanted to be a sound effect machine.  We laughed and laughed and told him he could be anything he wanted except for that.  When I think about it, we were wrong.  Because that guy from the Police Academy movies was, in fact, a fine sound effect machine!  (We shared this with him later.)

We all want our children to be creative and imaginative, but when they get to a certain age, we seem to discourage it.  The whole world discourages it.  It’s not cool, it’s not appropriate, it’s time to grow up.  And for some reason, people think growing up means letting go of that imagination…that sense of wonder.  Not completely, but enough to forget how big your dreams can be.  Enough to forget that we once believed we could be anything!

So I have determined that if the people I love are going to believe in themselves, then I must make sure they know I will always believe in them.  And if they have a dream, no matter how silly it may seem to me or anyone else, it is their dream and they have the right to it.

If my oldest says he’s going to be a famous musician and a YouTube star and find a cure for blindness, I believe him.  If my middle child says he’s going to be a professional athlete, a physical therapist, go to work for Rob Dyrdek, or even be a sound effect machine, I know he will.  And if my baby girl says she’s going to perform on Broadway and be an equine veterinarian and join the Secret Service, I have no doubt it will happen.

So if she says there are mermaids, who am I to argue? 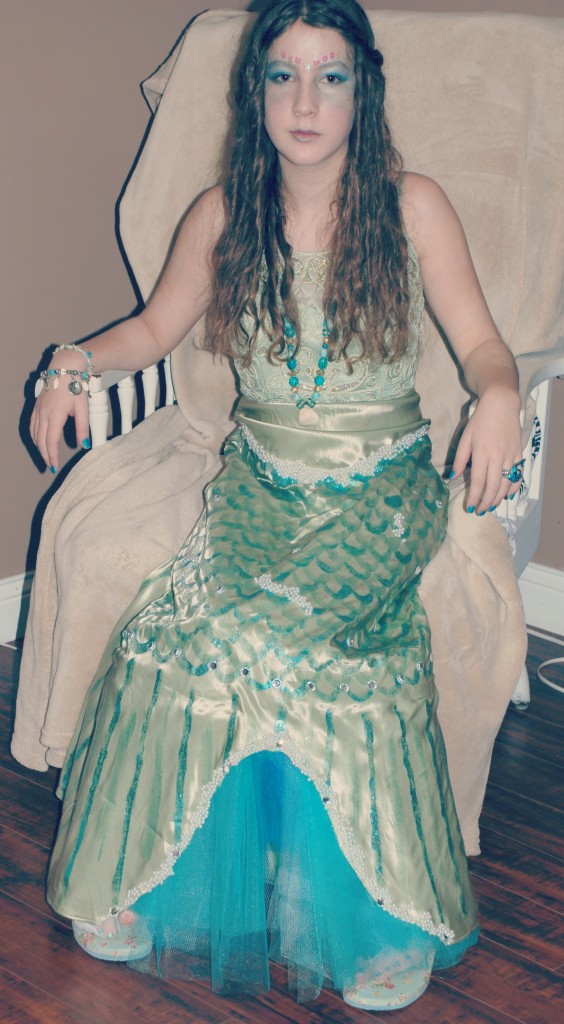