Who doesn’t love some good BBQ? Pulled Pork BBQ is kind of a big deal around here and if you need an easy recipe that’s huge on flavor, this is the one for you. Top it with some Hot Slaw and it’s a meal fit for your best company! 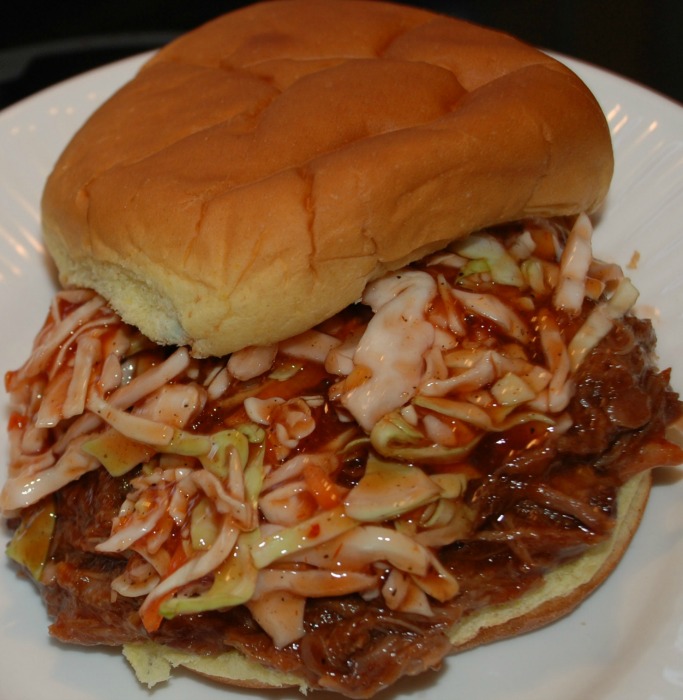 Pulled Pork is one of those dishes that is actually fairly easy to make and definitely easy to share. It makes a fabulous potluck or party dish and it goes with just about any side dish. Honestly, this particular recipe has been on our table for more occasions than we could probably count!

One of my favorite memories involving Pulled Pork BBQ happened at The Super Trooper’s family reunion. Because of work, I missed out on a lot of festivities, but I’ve rarely missed a chance to send food. At this particular reunion, my husband scraped the leftover out of the crockpot into a bowl for someone to take home and left it on the counter.

Now normally, his family is fairly law-abiding, but there was apparently something about this particular pulled pork that made even good people go bad. Someone picked up a bowl of bbq, knowing someone else had put dibs on it. The shame. They admitted doing it too…but only because they too made the mistake of putting it down and someone else picked it up!

All of this pilferage…right there in front of the police!!!!

I think this should be a lesson to all of us:  Never put your food down at a family reunion (or at my mother-in-law’s house…she will throw your food out and wash your dishes.  True story.)!!

Just in case you’d like to try this for yourself…

You Need This Stuff

Pork Butt Roast (I used two…that is all I could fit in the crockpot! Also, you can use another cut, but pork butt is awesome for bbq.)

*New addition: I started pouring 1/4 cup of apple juice on top of the roast (after the spices and sugar). It just gives it a little extra something!

Now Do This Stuff

Put the roast in the crockpot. You can mix the “rub” in a bowl and then put it on top or you can do it like I do and just pour it on and spread it out!

All the spices can be adjusted to your own taste. We don’t use a ton of salt here, but I think the sauce and the slaw have plenty. (And if we’re being really honest, I actually had to measure these out just to share this recipe. I generally just eyeball it!!)

Cook the roast. If you are in a big hurry, four hours on high will usually get it done. Long and slow is best though…8 hours on low. Another alternative is to cook it for a couple of hours on high and then turn it down to low for a few more. Again, base it on your preference and time constraints! (In the above “after” picture, I cooked it overnight while we were sleeping. I kept dreaming about food.)

After cooking, drain the grease and remove any bones or large pieces of fat. Don’t worry if a little fat gets left in the mix, it tends to melt and make the meat juicy! Just don’t leave big huge globs of it. That would just be gross.

Then shred it, pull it, or whatever you want to call it! It’s usually tender enough just to do with a fork. Or two forks.  Or whatever method is easiest for you. My method sometimes involves making my husband do it. Let me know if you need help.

Also, you are going to need a little sauce–about 1 1/2 to 2 cups. I like Sweet Baby Ray’s a LOT. If you have a favorite, go ahead and use it. Or make your own. I’m going to do that someday. I mean it.

Add more or less sauce, depending on the size of your roast. I’m getting hungry.

I like to serve my bbq with a Hot Slaw recipe I actually made up by my little old self! I was inspired by a little grocery store deli in Southeastern KY. We used to get bbq and “hot” slaw to go on top. Everyone seems to remember this, but no one had a recipe. Enter: The Internet!!! I searched and found several different recipes, none of which was exactly what I was looking for. So I just made one up and I’m not mad about it!

This Is What You Need:

1 bag of coleslaw mix (because I’m lazy that way).

Put everything but the coleslaw mix in a pot. Heat it on low until it just starts to bubble. You want the sugar to melt, but you don’t want it to burn!

Pour the coleslaw mix into a bowl. Add the sauce and stir until all of the cabbage is covered. To make this extra special, put the coleslaw mix in the food processor and cut it a little finer. I don’t know why this makes it taste so amazing…it just does! 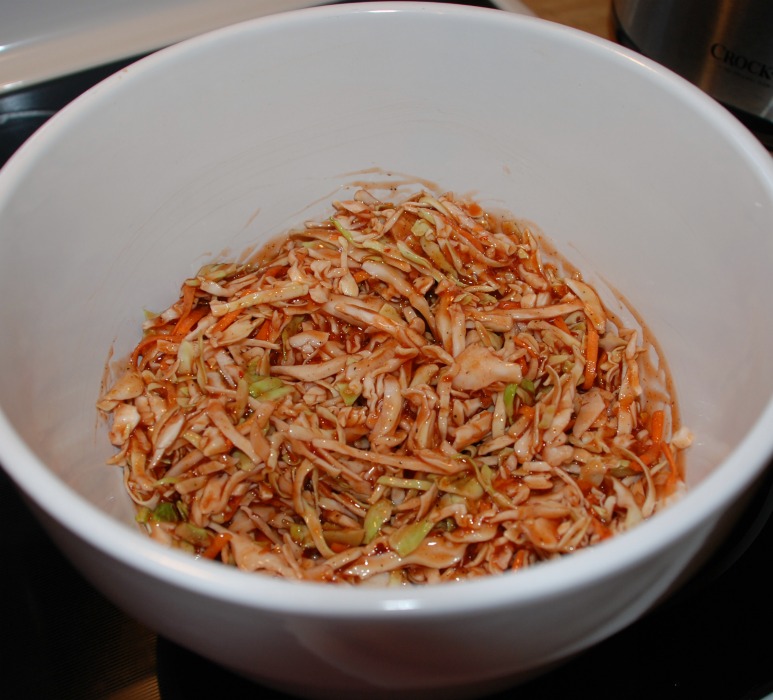 You can eat this while it’s warm or put it in the fridge. It’s fabulous either way!

Last but not least, put your bbq on a bun and cover it with some hot slaw. A little mustard and some bread-and-butter pickles don’t hurt. Also, a little creamy coleslaw and Mimi’s potato salad on the side is not a bad thing!! 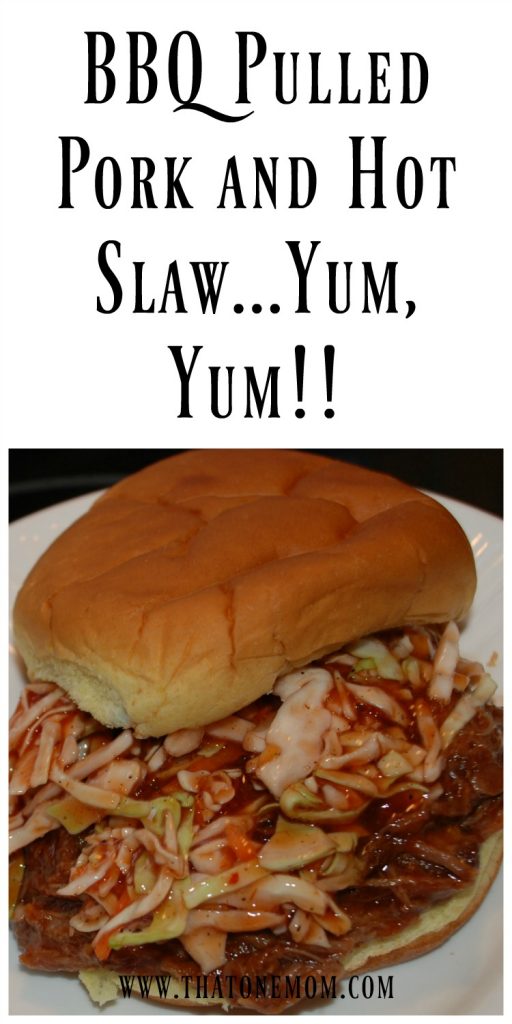