Just a few short days ago, it was a lovely 71 degrees in our little corner of the world.  Then winter apparently decided to happen early, the temperature plummeted, and it has been snowing for the last two days!  Fortunately, it’s been a light snow and the ground is still warm, so nothing is sticking.  I love to watch it fall, but I’m not ready for accumulation just yet.

Still, it is pretty to see and it has really helped me get in the mood to start my Christmas decorations.  I have now made my first official Christmas craft (I’m not counting my printables) and I am pretty excited about it.  I think it’s awfully cute, but more than that, it was very easy to make. 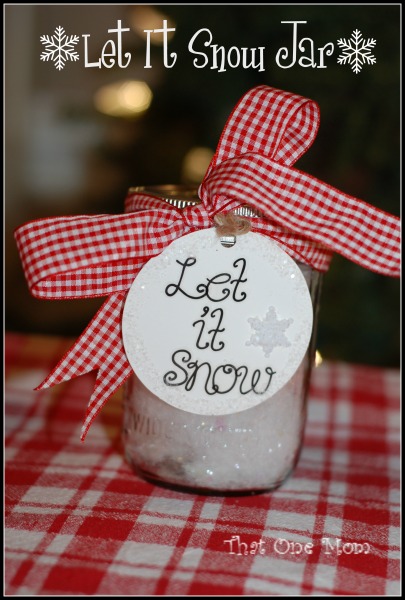 To make the Let It Snow Jar, you will need:

Mica flakes or fake snow of any kind

Fill the jar with poly-fil and sprinkle the fake snow on top.  I turned the jar and moved the poly-fil around to make sure you could see the flakes.  The lid is optional, but I used it because I tend to spill things and that fake snow is a booger to sweep up!  Tie a ribbon around the opening.  Use scrapbook letters to spell out “Let It Snow” on the circle cut out.  An embellishment is optional, but I had some leftover plastic snowflakes from another craft, so I glued one to the tag.  Cover the edges of the circle and any embellishments with Mod Podge.  Sprinkle glitter on top, shake off excess, and let dry.  Once it’s dry, punch a hole in the tag and tie to the ribbon that is circling the opening.  I used a very small piece of jute for that, but you can use more ribbon or even a piece of wire.  That’s it!  You now have your own jar of snow.

Just in case you don’t have any scrapbook sticker letters, I’ve made a page of tags for you to print out. Use them to decorate your own jars of “snow” or even as gift tags! 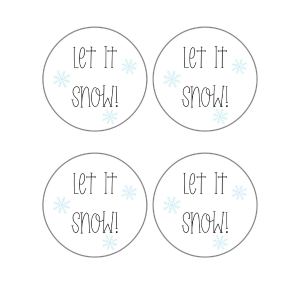 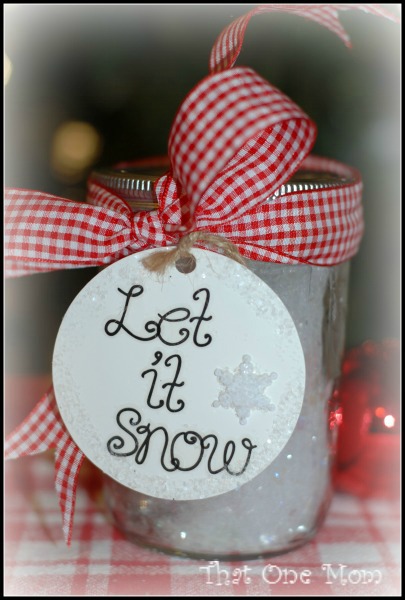 I hope you enjoy it and…