Everyone but my Momma and Mother-in-Law had pretty well established their nicknames.  We had three Grannys, one Nannie, and a Mammaw.  My Mother-in-law decided she wanted to be Granny too, but my Mom wanted something different.  My three best friends were in the waiting room when Funny Bubby was born and they declared that she would be “Mimi.”  And so she is!

If there is ever anything you should know about Mimi, it’s that she is one heck of a cook.  Her fried chicken can’t be beat and her potato salad is to die for.  She’s also a really gifted artist.  However, this is all about the potato salad, so without further adieu…

Peel and chop six to eight medium potatoes.  I used eight for this batch, but by the time I got finished cutting out the bad spots, it was closer to seven.  I’ve bought different varieties of potatoes from different stores and I still haven’t had a good bag in months.  Not sure what that’s about!

Cook the potatoes in a covered saucepan until tender (usually 15-20 minutes).  Cook the eggs with the potatoes for a faster finished product!!  Drain and transfer the potatoes to a large bowl.  Put the eggs to the side until the last step. 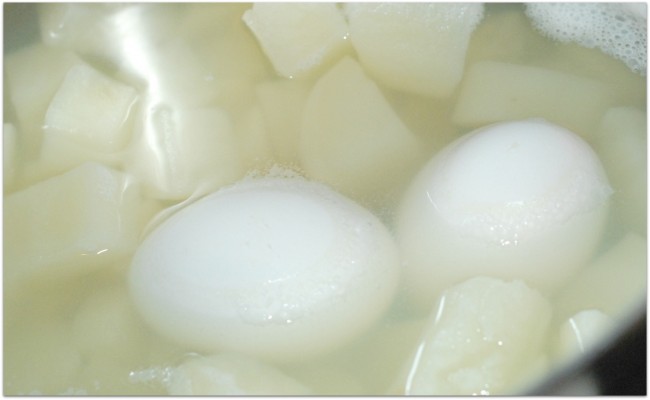 Chop the celery, onion, and pickles.  My husband made those pickles…they are YUMMY!!  I’m so proud.  Also, I didn’t use that whole onion.  I used less than half, actually.  Here’s a quick tip:  If your onion is very strong, don’t use the amount the recipe calls for.  Especially if it’s going to be raw.  I love onions, but sometimes I want to taste the other ingredients too!! 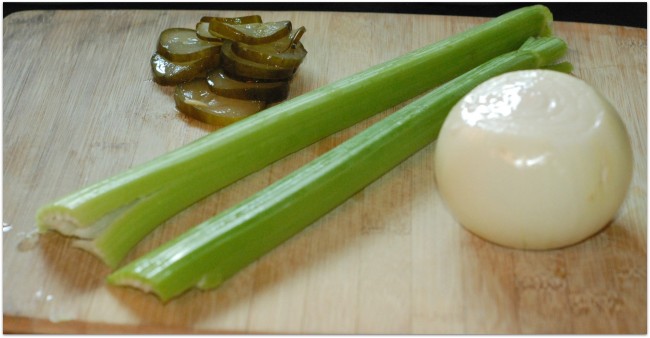 Add the celery, onion, and pickle to the potatoes. 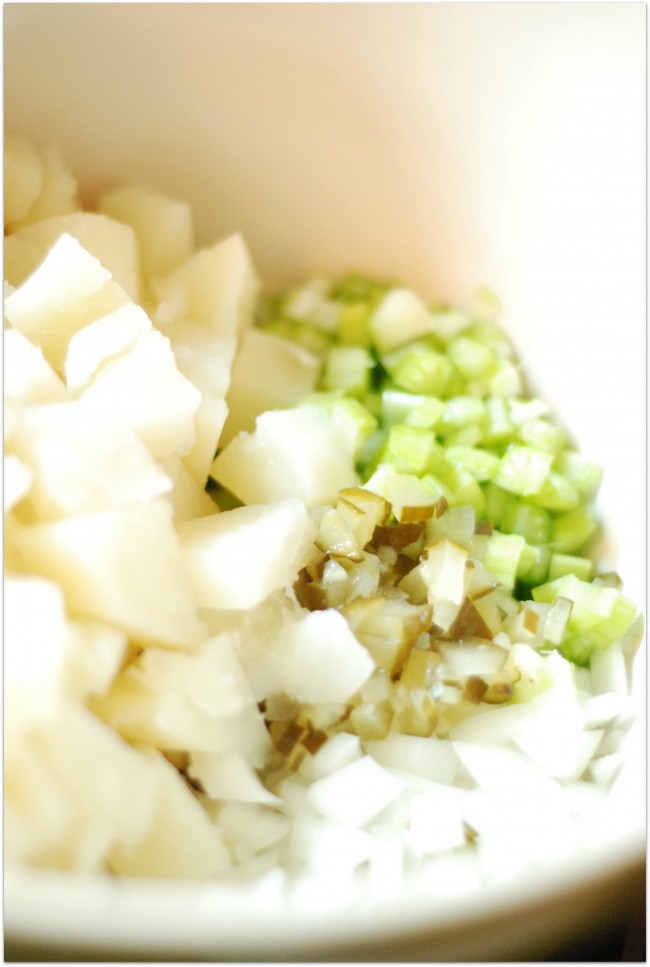 Combine mayo (I like Hellmans), sugar, celery seed, salt (if you are going to use more mustard, use less salt…much less!), and mustard to a bowl.  Here’s where it gets tricky.  Mimi’s recipe calls for two teaspoons of mustard, but I generally add more.  I don’t usually measure it and instead, go by the color.  I can tell by looking when it’s just right!!

This is what it looks like with two teaspoons. 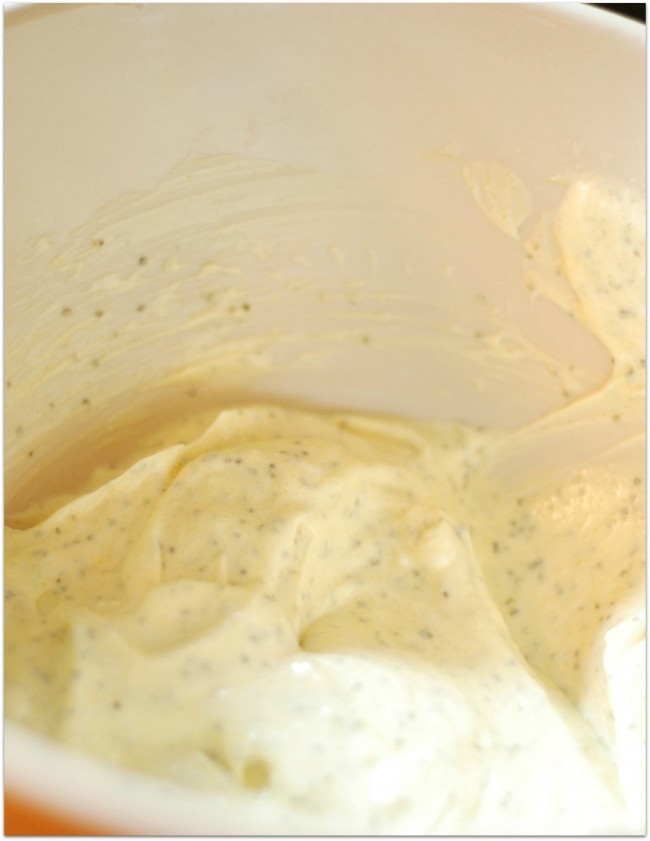 This is what it looks like when I get done with it.  Two teaspoons and almost 1/4 cup extra later!  See the difference?!? 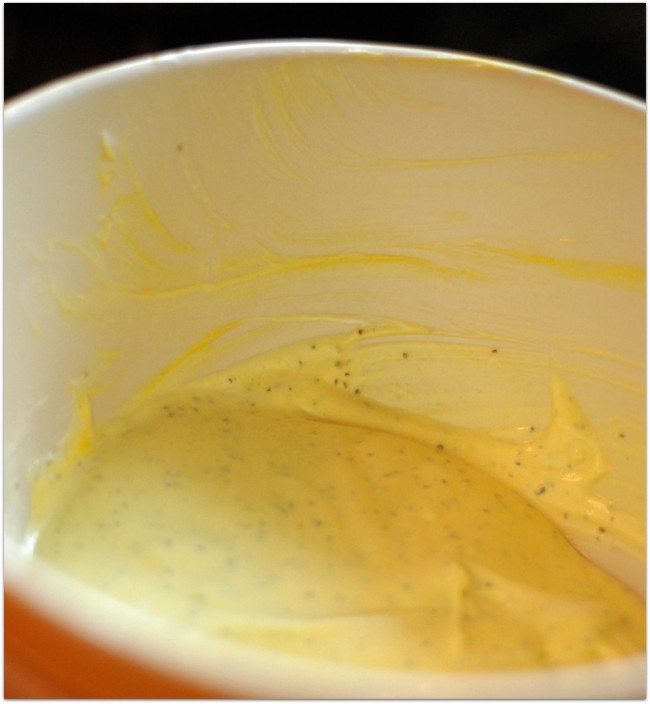 Once you have the right amount of mustard, add the mixture to the potatoes.  Toss it lightly to coat.  If your potatoes are too chunky, you can use a fork to mash them just a little.  Fold in the chopped eggs. 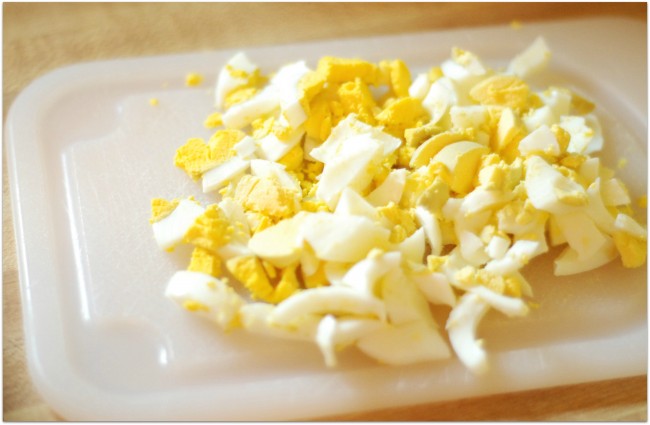 Sometimes I boil an extra egg and use it to decorate my salad.  Just slice it and place it on top.  Cover and chill.  (Don’t make fun of my decorating skills.  I don’t make much that looks good.  I’m more worried about how it tastes!!  Someday I’ll learn.) 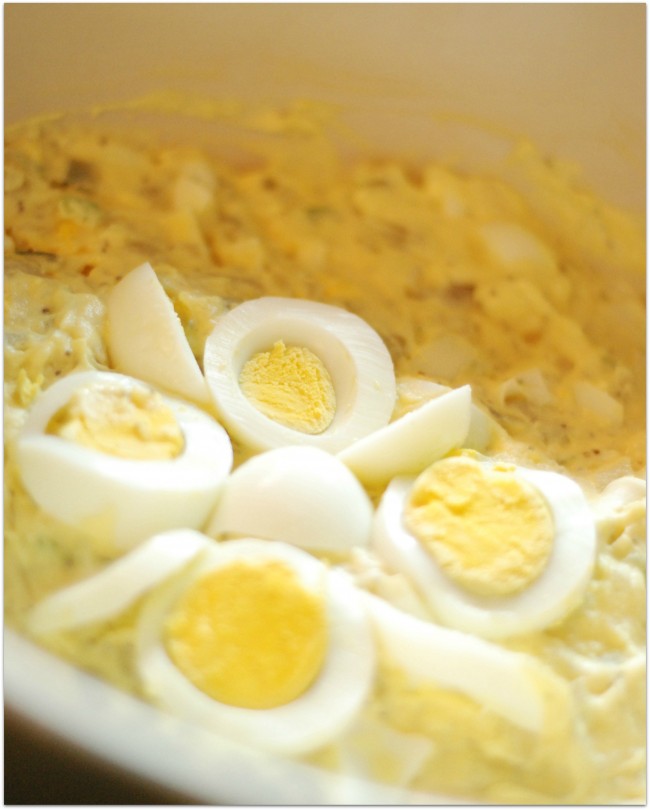 I actually didn’t like the way that looked, so I chopped up those eggs with a fork and mixed them in the rest of the potato salad! 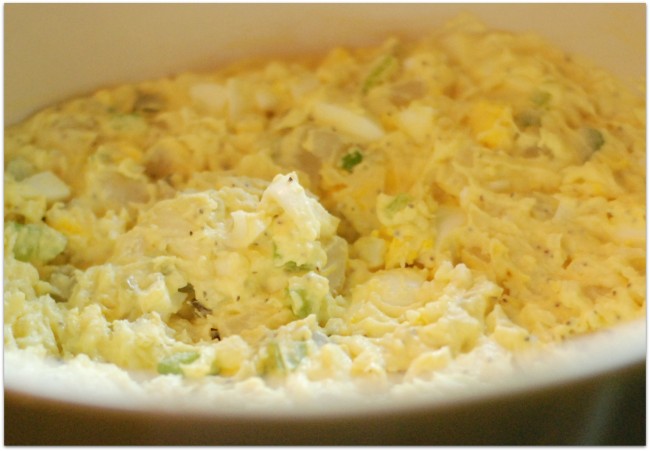 I have to say this dish is pretty popular at my house.  Three out of five love it and the other two don’t count because are super picky!!!  It’s great served with burgers, hot dogs, Pulled Pork, BBQ ribs, or even just baked beans.  No matter what you eat it with, it’s going to be good! 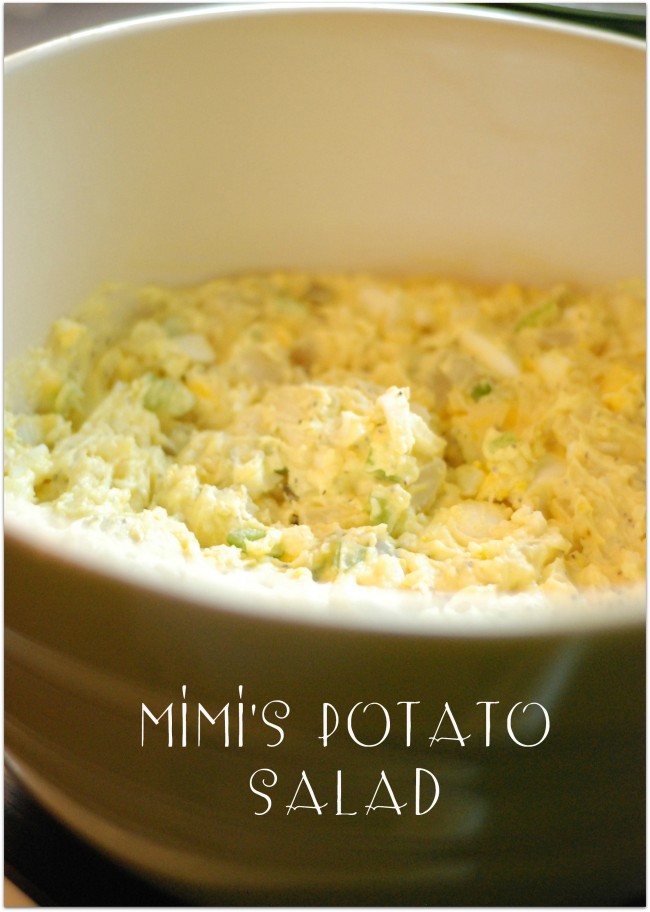 « Welcome To Clinton, Y’all: Antiques and Appalachia!
Roast Beef Horseradish Roll-Ups (and the Importance of Double Checking Before You Delete Things…) »