You are here: Home / Holiday & DIY / A Little Christmas Every Day / The Importance of Giving (and Receiving) With a Cheerful Heart

The Importance of Giving (and Receiving) With a Cheerful Heart

(Updated Post Alert: This is an after-Christmas post from 2014. I had every intention of writing a new post about how giving and receiving with a cheerful heart is important and it really is “the thought that counts,” but after rereading this one, I decided I probably just couldn’t say it any better!)

I started off the Holiday Season like a whirlwind. I had big dreams and plans and calendars full of ideas. Now, Christmas Day has come and gone and my big plans fizzled out before we even got there.

Truthfully, they didn’t all just die out. Some of them, I let go on their merry way just because I couldn’t be faced with finishing them. I stalled and restarted and then I burned out like an old light bulb. And I don’t regret it all that much.

You see, somewhere along the way I lost sight of why I was doing what I was doing. I’m ashamed to say that I forgot the true meaning of Christmas for a minute and that little bit of carelessness hurt me. I was so excited by the extra page views and the fact that I now have six dollars sitting in an Adsense account, that I forgot why I want to write, why I like to share, and what my intentions were for the Holiday Season.

My schedule was full to the brim of post ideas. All I had to do was write them. Well…that and create, photograph, and edit the various food and crafts. Plus, add the links and make the little pinnable graphics to use. Couple that with all of the great Advent ideas, cooking, decorating, gift-giving, celebrating, traveling, and Random Acts of Christmas I had planned and honestly, it all just became too much.

Then life reminded me.

Nothing went right. Everything I tried to do–every idea I had, every plan I made–was hampered by someone or something. Sometimes it was fatigue. Once or twice it was forgetfulness. Occasionally it was worry. And sometimes, just sometimes, I would read a blog post that was almost identical to the one I had in mind–except with better pictures!

None of my family plans worked out either. Someone always had to work, the money just wasn’t there, or sitting in traffic for over two hours to see Christmas lights was more than my nerves could handle. And time–let’s not even talk about time. Suffice it to say, there were a lot of days when I just couldn’t seem to find enough of it!

So I stopped. I just stopped everything that was nonessential to our celebrations. I cooked what I wanted to and never once worried about taking pictures of it. I put up the minimal amount of decorations in the kitchen (by choice) and even though I wanted to finish the Trooper Tree, I let it go. I allowed myself to spend extra time at family gatherings and not force myself to come home and edit pictures and write stories about our “escapades.” I pared down the Advent and passed on most of the Random Acts I had planned. I gave what I had to give and what I wanted to give and I did it so much more cheerfully! I think it meant more to all of us that way. 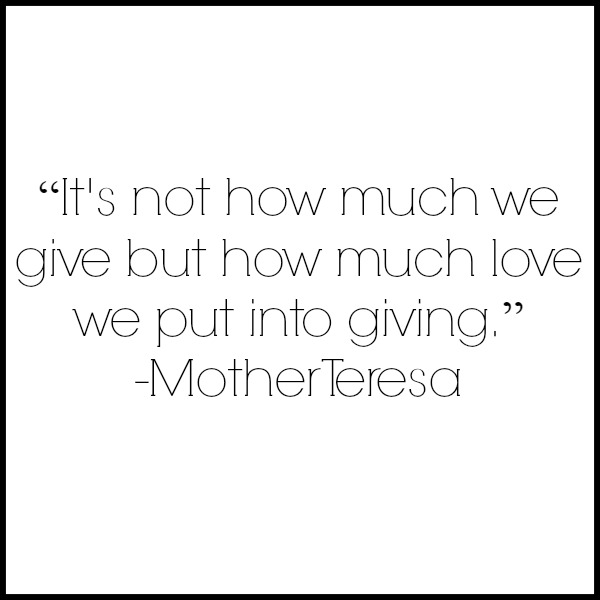 We have a Christmas memory in our little family that we remind each other of quite often. It wasn’t until I heard my sister talking about the same memory on Christmas Eve that I realized that it had such a profound effect on us all.

We always spend Christmas Eve with my side of the family. When my middle child was about four years old, we went to my Momma’s to open presents before heading down the hill to my Nan’s for dinner. My Mom has never been wealthy, but she always manages to give her grandchildren plenty of gifts. There has never been a shortage of things to unwrap! Sometimes, however, there is a shortage of boxes to put the gifts in and being fairly thrifty, Momma just uses what she has. Her old iron died and she had to buy a new one (Momma irons stuff–I didn’t inherit that gene). Since she needed a box to put a toy into, she just stuffed it in that box with its picture of a shiny new iron on the side.

Manners have always been important to me and I’ve always told my children if they didn’t like a gift, not to say anything. Just be polite and accept it graciously and we’ll figure out what to do with it later. I’m not sure if my sweet little Sunshine Boy took that to heart or if he really just thought an iron was a cool gift for a four-year-old. Imagine a little fellow taking the wrapping paper off of a box and seeing a picture of an iron. Now imagine that same baby, in one of those precious four-year-old voices, saying “A new I-Run (that’s how he pronounced it). Just what I been wantin’!” It was definitely one of those “Awww” moments.

You can’t even imagine the excitement in those little eyes. It might as well have been the “it” toy of the season. What followed was almost heartbreaking. Inside the box, was a stuffed animal–a cute little stuffed kitty to replace the real little kitten that didn’t survive a trip out into the middle of the road. The look of sadness and confusion on his little face was enough to prompt my Mom to want to run out and buy him a real iron. Of course, we told her he wasn’t really ready for his own iron and he kept telling her he really did love the kitty cat.

The whole point of the story is that it should never be just about the gift. It should be about the giver and the recipient. Gifts should always be given cheerfully. If it is given begrudgingly, then it is not really much of a gift. And gifts should always be received with appreciation. If the thought is not appreciated, then the gift is not really deserved. Even though he thought it was a household appliance, my baby was determined to appreciate that gift. Children are amazing like that sometimes.

And isn’t that the idea behind the whole Christmas Season…to give with love? And to appreciate the Gift?

If you are giving because it’s expected or because you are worried about what people will say when you don’t, then you are giving for the wrong reason. If you can’t accept a gift happily and without judging its monetary value, then you probably didn’t need to get it in the first place. Either way, it really is the thought that counts!

I sincerely hope that everyone gets to experience giving and receiving with a cheerful heart during the Holiday Season. And please know that sometimes I may lose my way, but everything I share on That One Mom, I do because I want to–not for fame or bragging rights or even the allure of six dollars for advertising! It’s not just my job, it’s something that brings me joy.

Sincerely and With Much Love,

Normally, I would put free printables in the Subscriber Freebie Library, but because I want everyone to remember the importance of giving and receiving with a cheerful heart, I’ve created this free 8×10 digital download for you!! Just click the link below the picture and print! (For personal use only, please.) And definitely sign up for my mailing list and get access to all the Subscriber Freebies in the library! 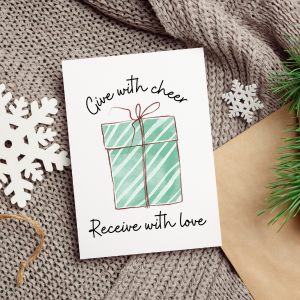 For more thoughts on Christmas and ideas for your holiday celebrations, please visit the articles included in my Christmas section!!

« 17 Fun Facts About Christmas
Christmas Traditions Around the World »