You are here: Home / The Writing On My Wall... / Top 10 Tips For Decluttering Your Stuff!!

Top 10 Tips For Decluttering Your Stuff!!

I’m a big reader.  I really like to read articles about things I need to do and then imagine what it would be like if I actually did them.  I guess I could be described as a somewhat passive do-er.  (Meaning that I don’t always do a lot until I get to the point of being overwhelmed and decide I MUST do something.)

One of the things I like to read about and not do is declutter.  I’ve read dozens and dozens of articles about it.  They usually contain very good tips and I am occasionally surprised by the genius of them, despite the fact that they are really just good common sense.  Common sense doesn’t always apply around here though, so I decided to write some tips of my own.

Remember: If anything in your house is broken, don’t fix it. Leave the ripped wallpaper, the unfilled holes and gouges, the falling in ceiling, anything that’s rusted, mildewed, stained, unpainted, torn, cracked, or smelly. If your family isn’t ashamed and embarrassed by your home, don’t get upset. Just don’t invite anyone over. Ever.  Or be like me and only invite them at Christmastime, because it’s the one time of year that your house is guaranteed to be clean and nicely decorated!! 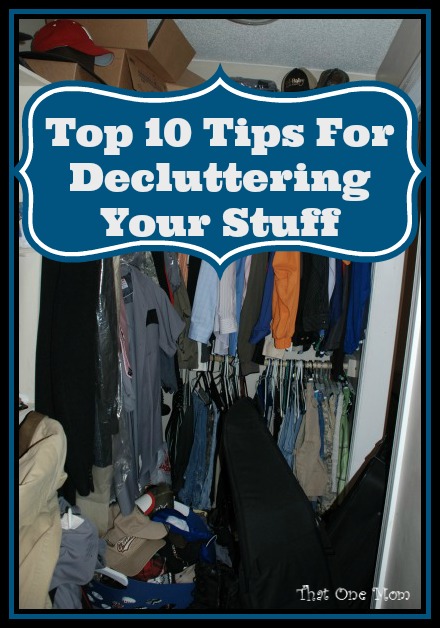 *This is meant to be a joke.  (Sort of.)  My house is always in some state of messiness, but I do clean the parts that people use on a regular basis and I do invite people over (occasionally).  They are just used to it by now!  Please don’t recommend me to the Hoarders team just yet.  For more tips on how I am actually decluttering my house, please check out my “House and Money 2015:  Organizing Everything” post.  It contains some great links to websites where the bloggers are actually good at keeping the mess at bay!!