You are here: Home / The Writing On My Wall... / “Use What You Have” Christmas Decorating

“Use What You Have” Christmas Decorating Ideas

This year, I wanted to change up some of the Christmas décor and go with something a little more “merry and bright.” Unfortunately, it wasn’t in the budget to go buy all new decorations so I had to get crafty!

Now y’all know that doesn’t always turn out well for me, but it hasn’t really stopped me yet. And since I knew I wanted something different, it was a perfect time to dig through the craft hoard.

Luckily, there are lots of unused craft supplies around this house and once the creative juices started flowing, I was able to finish all sorts of Christmas projects! 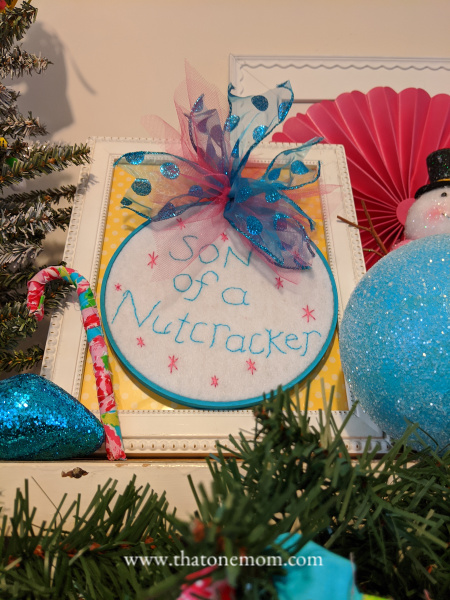 There is the cutest pillow on Pinterest. It’s white with polka dots and says “Son of Nutcracker” on it. I really wanted that pillow, but remember when I told you “not in the budget”? Well…buying a pillow like that is definitely not in the budget and neither is buying the supplies to make my own!

However, I did find some felt in the closet and some embroidery thread. Let’s just go ahead and say that until a couple of weeks ago, I hadn’t embroidered anything in several decades. Did I mention, several?? The occasional cross-stitch project maybe, but definitely no embroidery. Naturally, I decided this was the perfect time to “freehand” some letters. Because I am just that confident.

Honestly, they didn’t turn out that bad. (Luckily I was going for the whimsical look!) The original idea was to glue mini pom-poms onto the felt, but it looked weird and I stitched a few stars instead.

The next step was to paint the embroidery hoop. The paint and the hoop also came out of the craft closet. I’d like to tell you what color it is, but I had Bimini Blue and Tahiti Blue out and they sort of got mixed together. I think it’s a pretty blue anyway!

After that dried and the felt was put in, the only thing left was to trim around the edges and put some ribbon on top. Those were mostly leftovers from my daughter’s graduation party.

I put some scrapbook paper in a frame as a backdrop and tried to attach the hoop to the glass. So far, neither glue dots nor hot glue has done the trick. For now, the embroidery hoop is just propped against the frame, but it’s working just fine.

Confession Time: A big chunk of the decorations in our hallway this year are leftover from our baby girl’s high school graduation party! I reused the tassels, the huge pink rosette, the rag garland, leftover fabric, and some of the scrapbook paper. She also graciously donated a snowglobe from her collection and a snowman that usually goes with her own Christmas decor. 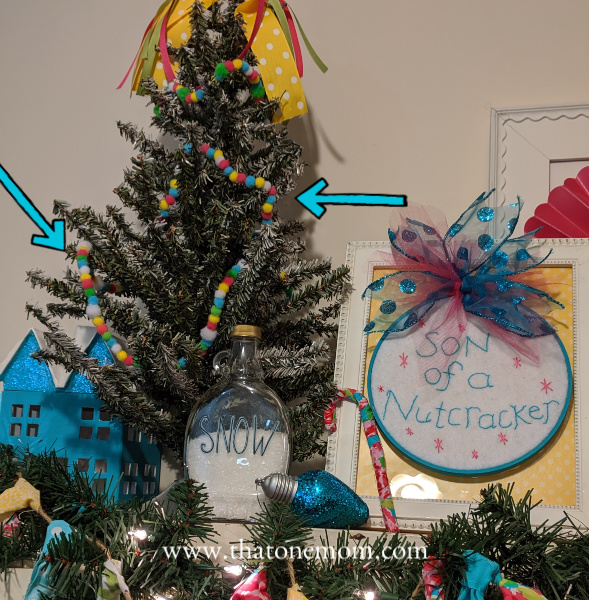 The mini pompoms are the only thing I’ve spent money on for the hallway so far. They came in a huge bag of various colors and sizes. The price was around $10 on Amazon, but I had a gift card so I only paid $4. (Thank you Swagbucks for fueling my Amazon addiction!)

When the pompoms didn’t look right on the embroidery hoop project, I decided that they didn’t need to go to waste and used the small ones to make a garland for the little tree.

For some bizarre reason—or maybe just because I already had the glue gun out—I decided to glue them together. I did that for about half of them and then realized I had spent waaaaay too much time working on a pompom garland. The second half got strung on some embroidery thread. You just pull the thread through the middle of the pompoms (using a needle of course) and tie a knot on each end…so much easier than gluing them together!

It would actually be nice to have more garland and/or pompoms, but there weren’t any of the right colors left and I’m not buying more right now. Maybe I’ll think of something else. 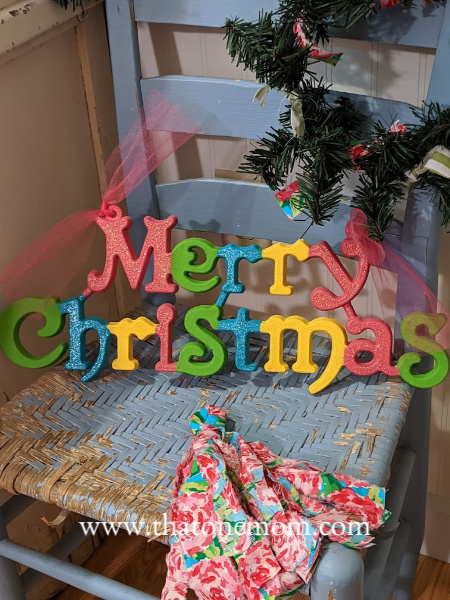 My sweet sister moved and gifted me with some of her Christmas decorations she didn’t want anymore. Some of them I use, but some of them don’t match the way I decorate. Basically, she likes gold and it’s not my favorite.

One of the decorations was a Merry Christmas sign covered in gold glitter. It got painted in colors that matched the fabric garland and tassels. Just FYI…painting over glitter is a pain in the behind! If I had it to do over, I would spray paint it with primer first. I went over some of the letters with glitter paint for a little extra “oomph”! (Also, I’ve taken 20 pictures of it and the pink in the pictures is not exactly the color it is in real life. It’s actually more, well, pink.)

Since it wasn’t actually going to hang, the cord got replaced with some hot pink tulle. I was going to use ribbon, but I ran out. 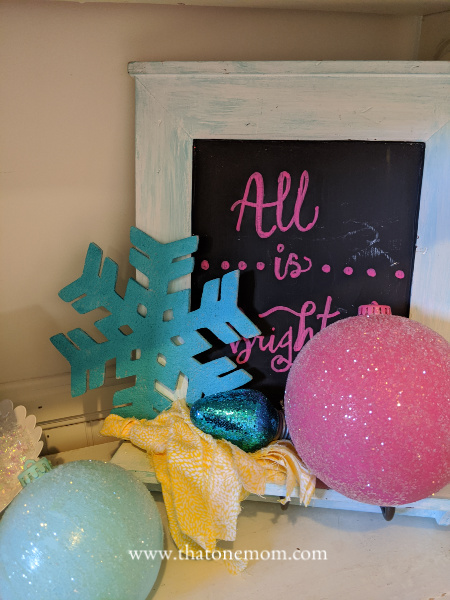 Between the craft stash and my sister’s donations, I found various sizes of ball ornaments—in gold, red, and silver. The small ones and a couple of the medium-sized ones were an After-Christmas Clearance purchase. They were also plastic and much easier to work with. The really big ones were gold and red glitter. Again, painting over glitter is a pain. However, when it comes to decorating, Momma always said: “If you don’t have what you need—make it!” At least, that’s what she taught me anyway.

A few of them were painted and then coated with Mod Podge Gloss and left plain. This makes a huge difference if you want ornaments that look like they came from the store. (I honestly just bought it on a whim, but now I’m glad I did!) The others were covered with white glitter. So sweet! 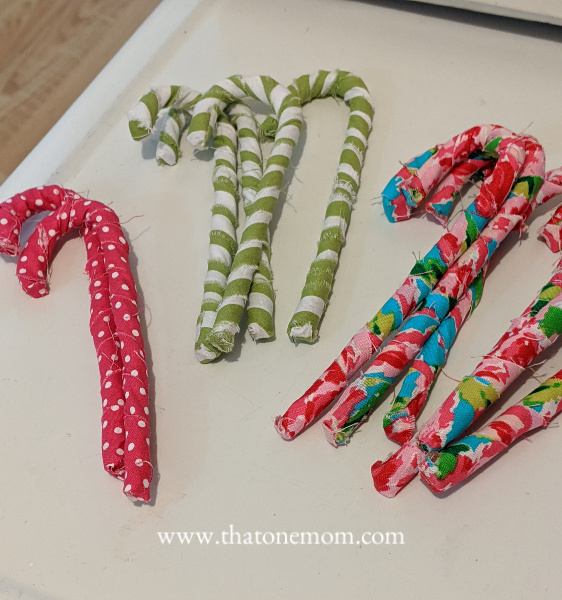 Y’all!! Y’all! This is my new favorite craft in the history of ever and I don’t even care that I burned my fingers more than once on the glue gun!

The candy canes came out of the craft closet, but I’m sure they were from the Dollar Tree because I’m forever buying them for something. The fabric was leftover from Spizzie’s Graduation Party. I did wind up taking one tassel apart because it was the only green one I had and basically, I just wanted to. Do you ever do that? Just do something because you want to? Sometimes it’s fun!

Anyway, there are all sorts of tutorials on Pinterest but you just take a strip of fabric (I think mine might have been about 7 and ½ inches long), glue it to one end and then start twisting it around until you get to the other end. You don’t even have to glue as you go! Just let the fabric overlap a little and glue it on both ends. Some pieces I had to trim and some I just folded over and glued. These are so simple and so adorable! 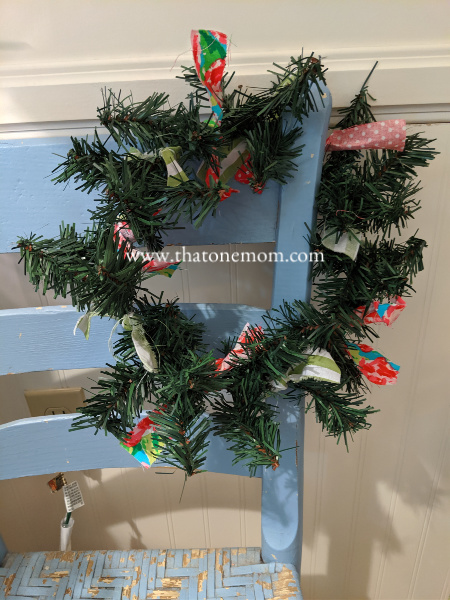 This was the simplest…the easiest…the fastest craft ever! Here’s how to do it: Take a wreath base that has nothing on it and tie random pieces of fabric strips to it. Voila!! 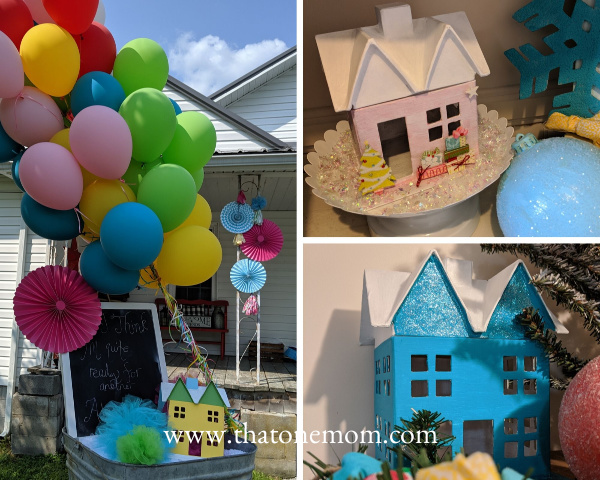 Spizzie’s Graduation Party had an “Up” theme and part of the centerpiece was a papier-mache house that I painted with some of the bright colors shown in the movie. The house was part of a set and the other two were sitting unpainted in the closet. I painted one of them white with pink glitter walls and added some Christmas stickers to the front. The other one was painted Tahiti-blue and accented with some turquoise glitter paint. Very simple, but perfect for the theme of the hallway. 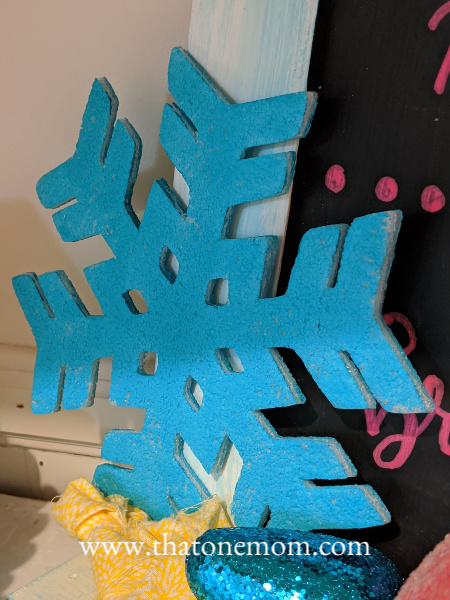 This is another one of those that is so simple, I almost feel silly for mentioning it. I’m not even sure why I bought this pack of foam snowflakes, but I thought they would be cuter if they were painted to match the rest of the hallway decor. By using a foam brush to swipe on just a little bit of paint, you can create a super cute accent piece. Who knew?!?

Now, the crafting isn’t over yet and the hallway isn’t completely finished (just a couple of things left to do), but these little projects are proof that you can use what you have and still change the look of something completely. You just have to get creative and get crafting!!

What sorts of Christmas crafting projects are you working on? 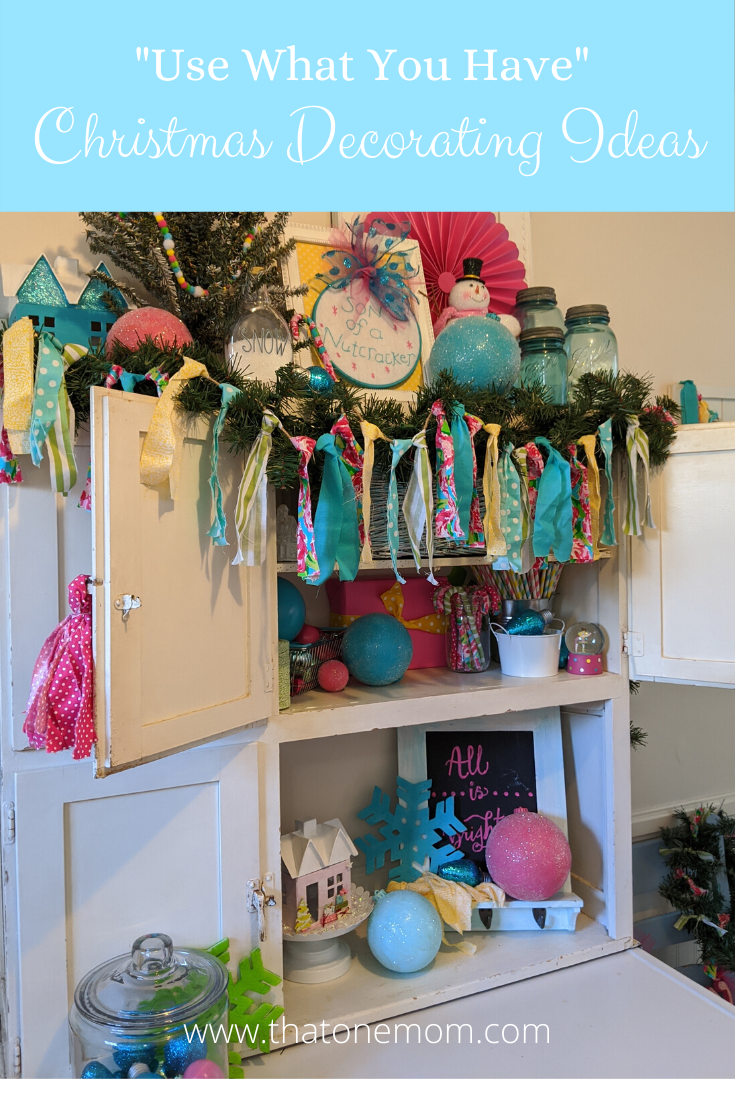 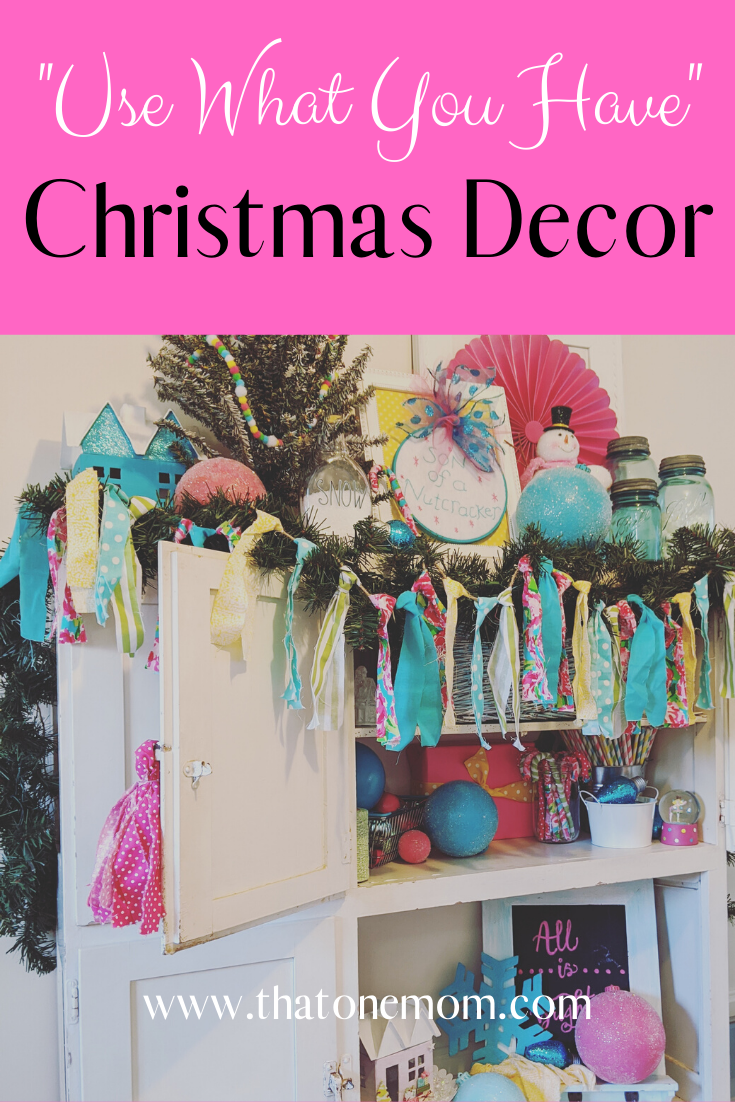