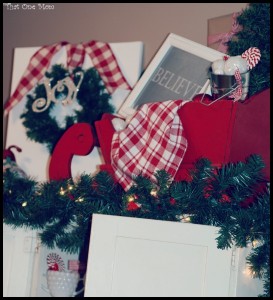 I had all of these fabulous plans to finish my Christmas decorating before Thanksgiving.

The good news is that I am farther along with my decor than I was this time last year.  That’s a plus, right?  And now that I have the hallway finished, I feel like the rest of the stuff will go up much faster.

I have three spaces in the house that I wanted to change-up for Christmas–the master bathroom, the front porch, and the hallway.

You might remember (or not!) my hall decorations from last year. 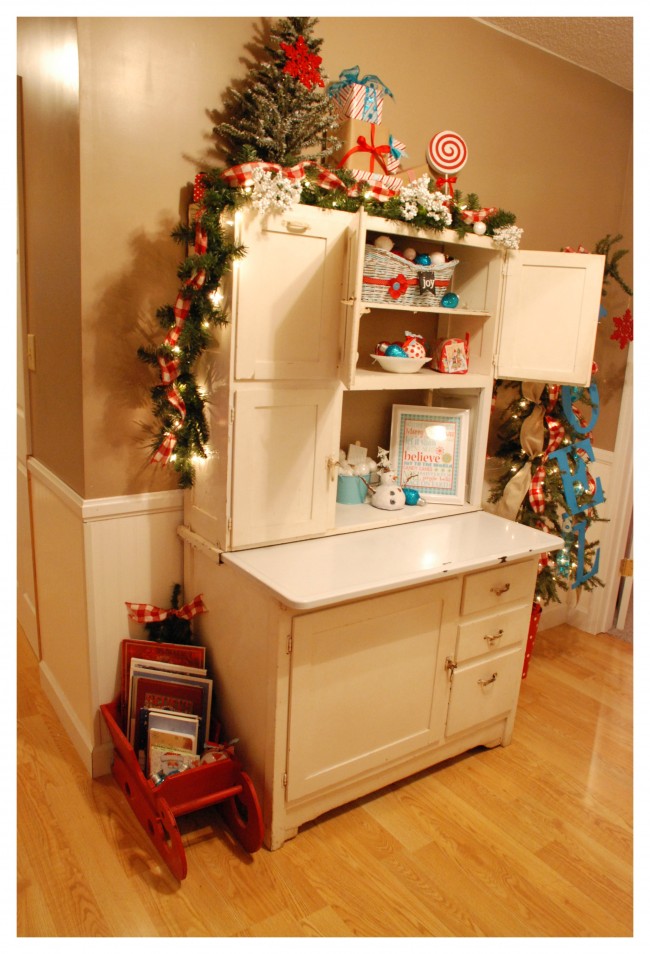 I’m still loving the reds and blues, but I decided I wanted to use that color combination elsewhere this year.  Then my husband, bless his heart, told me I decorate it the same way every year.  I even showed him side-by-side pictures of last year’s blue and red, along with the year before’s primitive theme.  His words:  “It looks the same.  You’ve got the cabinet and the trees and the window and the stuff on the top and the stuff in the floor.”  I have since decided that he is a lost cause (as if I didn’t know that when he told me he wanted to paint our bedroom “John Deere” green).  I’m hoping everyone else notices the differences though!

This year, I’m going with a red, white, and burlap look.  I think it definitely has a country feel to it.  But I’m a country girl, so that’s okay! 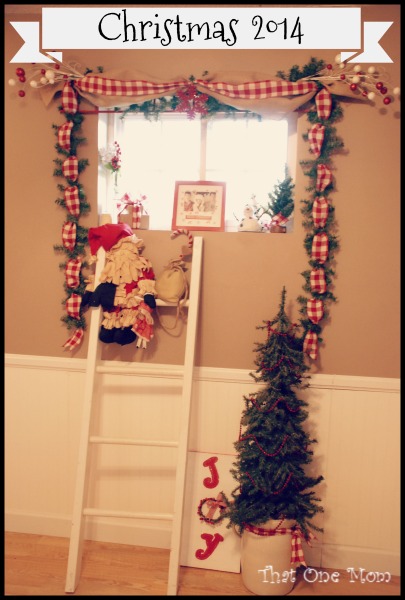 I used my little red ladder as part of my window topper.  I had a different vision for that than how it turned out.  It sort of got obscured by all of the fabric!  I also wish my greenery was a little fuller, but I’m using what I have this year and trying desperately not to buy any more Christmas decorations!  I am, however, not opposed to making some!  I painted the “JOY” sign using an old canvas, a dollar tree mini-wreath, and some red paint for the lettering.  I also used lots and lots of glitter!!  The end result wasn’t as cute as I had hoped (I didn’t like the letters), but it’s not even the worst craft I’ve ever made!!

That window drives me bonkers.  It’s in an odd place and it doesn’t really help with the light as much as you would think.  Here’s a picture at night, so you can get a clearer view of the details. 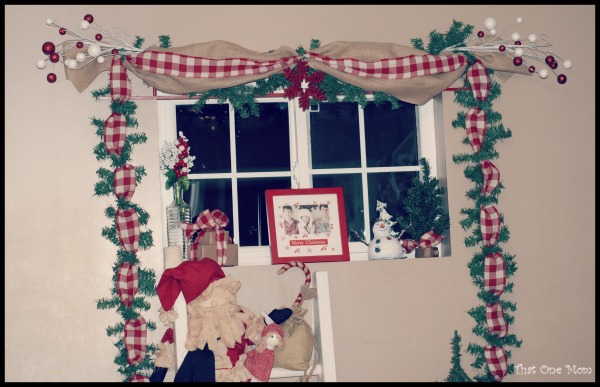 I fell in love with the fake presents last year, so I wrapped a couple more.   All of these other decorations get used year after year.  You just never know which room they will turn up in!!  I love my little snowman.  He’s been in about every room in the house since Mimi gave him to me.

I’m reusing the faux snowballs I made last year.  Actually, I’m going to make some bigger ones to use in the living room.  I also glittered some bells, painted some churches, and used a lot of the projects I’ve been featuring here on the blog. 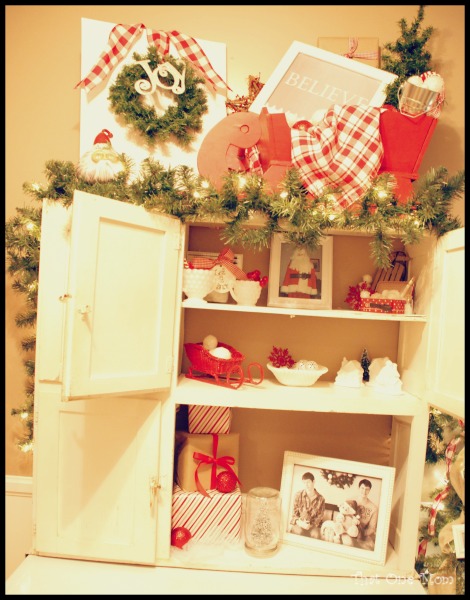 I love this picture of my babies.  It is so very “them”!!  They are silly like that all of the time and I love it!  The fake presents are the ones I used on top of the cabinet last year and I made the snowglobe using the glittered bottlebrush tree I shared a while back. 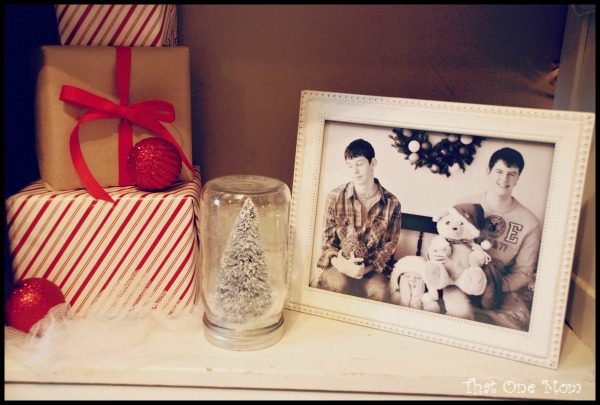 I just glued the tree to the lid and mixed some glitter with mica flakes.  I didn’t add water, but I have seen tutorials where they did and it looks very cute.  I just didn’t want to be bothered with having to glue anything else, since I almost glued my fingers together again while I was trying to get the tree to stick to the lid!  I knew the water would leak out otherwise and I just don’t have time to clean anything else up. 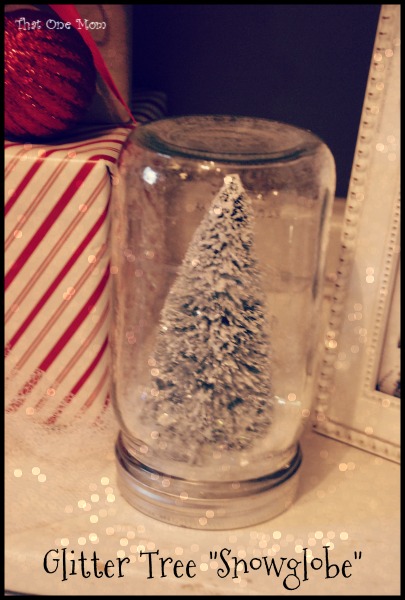 These are some of the crafts I’m using this year:  My snowballs from last year, the bells Spizzie helped me glitter, and my painted Christmas houses. 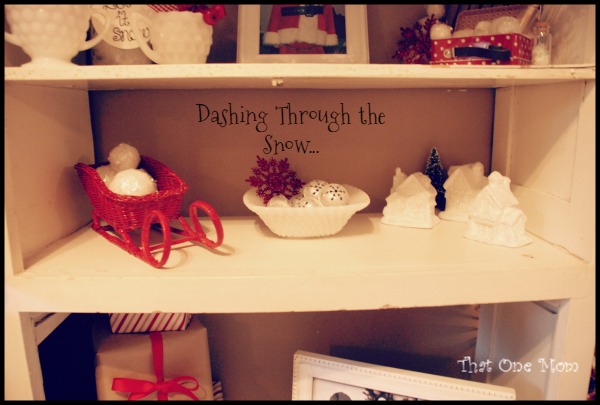 I bought the Christmas village houses at the Dollar Tree last year.  I really didn’t have plans for them, but I decided this year to paint them white and cover them in a layer of glitter.  I am so very obsessed with glitter.  It’s all over my house!  I even went to work the other day and found glitter and mica flakes on my cell phone.  That’s how you know you are hard-core! 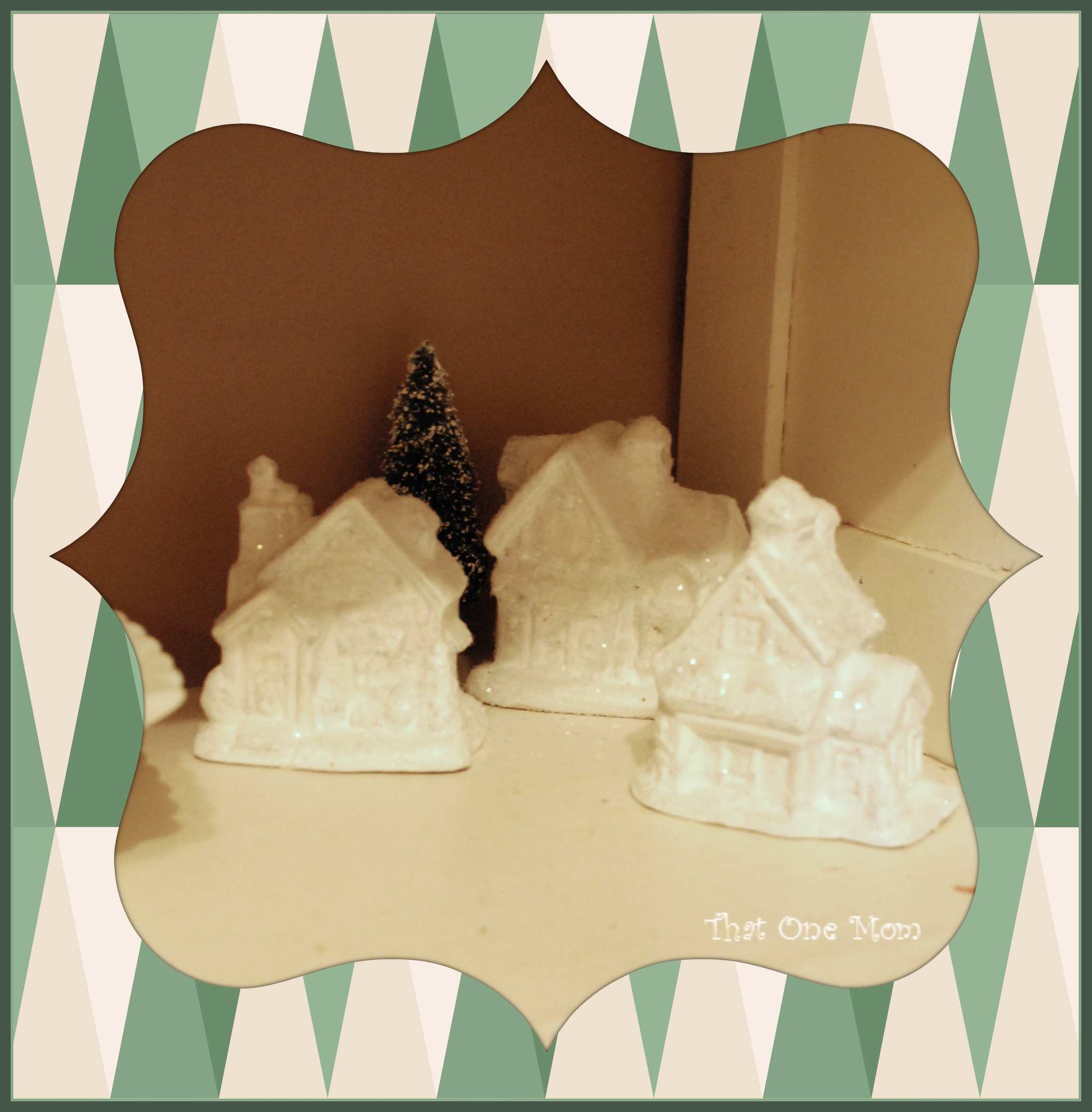 Hey, it’s Santa!  I know him!!  Really I do.  That’s Funny Bubby when he was still short and even skinnier than he is now!  He found my Stepdad’s suit and decided he would play Santa for the rest of the kiddies.  Unfortunately, no one was fooled!!  He looked awfully cute though and it was a lot of fun.

There’s the “Let It Snow” jar I featured, along with some hobnail milkglass that Spizzie bought me as a gift.  She also made the mini glass snow jar and the message in the bottle.  I was going to get the message out and read it, but she says there is not one.  How disappointing! 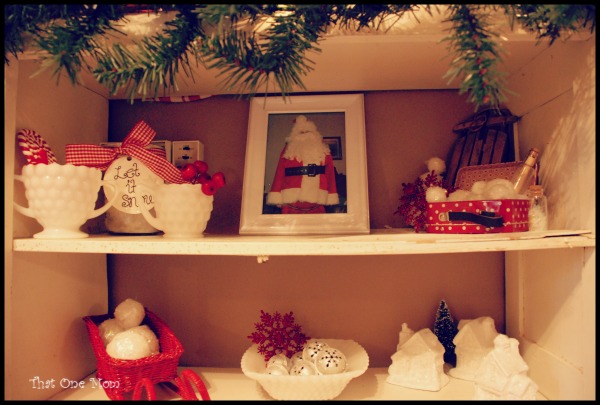 My wreath is just a small one I bought at the Dollar Tree last year and hadn’t used.  I tied some ribbon to it and stapled the ribbon to the back of plain white canvas.  The JOY ornament is another Dollar Tree special!  I believe I actually bought that one this year, but I’ll forgive myself a dollar and some change. 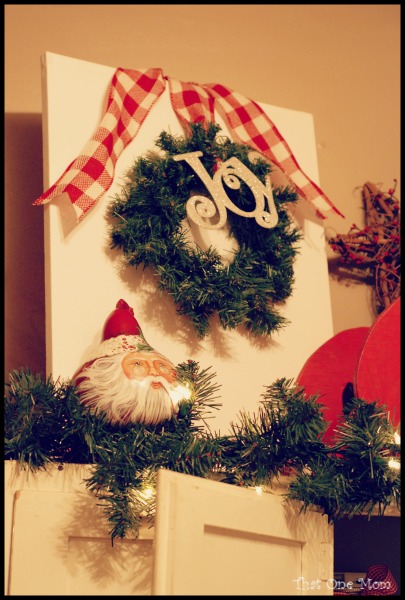 One of Mimi’s gourds is part of my hallway display this year.  I love her gourds.  I wish I were a better photographer, so that you could understand how detailed they really are.  *sigh*  Maybe someday. 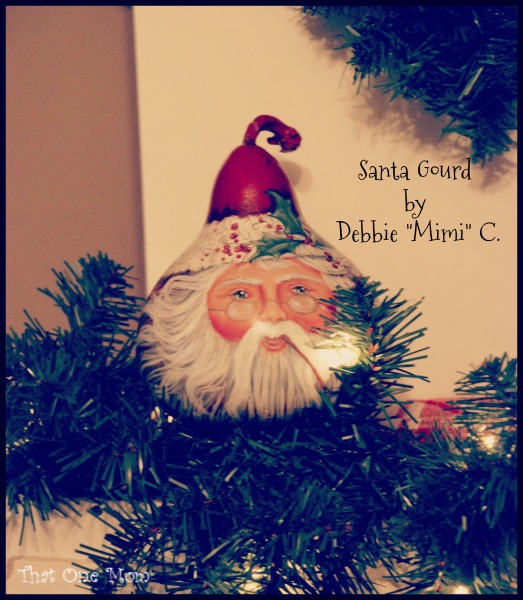 Here’s a better look at the top of the cabinet.  Notice the Believe Printable! 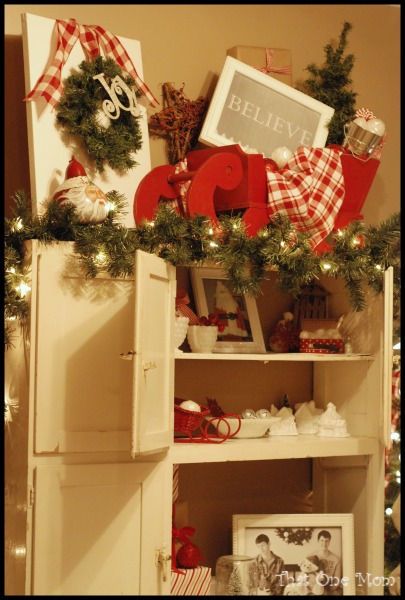 This is my favorite part of the Hall.  I edited some old Christmas pictures to make them black and white and then printed them out on card stock.  I’ve had the little frames for years, so it was simple to just change the pictures out and arrange them on the tree.  The Believe sign is one I usually use in the living room.  Guess I’ll be making something new to replace it!  The white snowflake was crocheted by Mimi, years and years ago.  So talented, that woman! 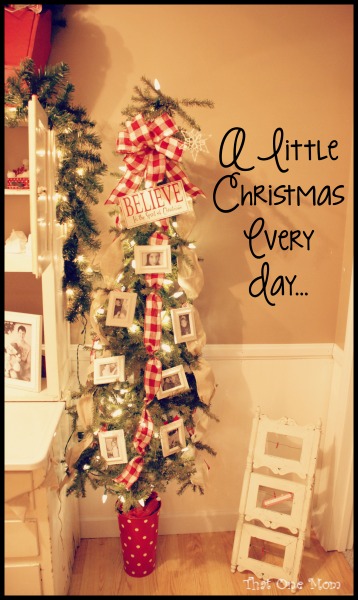 This is what the cabinet and tree look like together.  Cute, no?!? 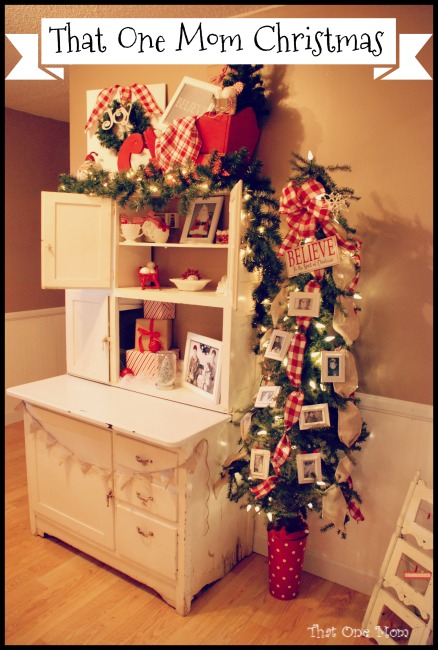 I love my little decorations and I can’t wait to finish the rest of the house.  I also can’t wait to see if my husband thinks this year’s decor looks any different or not.  Although, I really don’t know why I’m punishing myself!!

How about you–do you decorate with a theme or do you just throw it all together?