Let me just tell ya–I didn’t think I was ever going to get to decorate my porch!  My weird work schedule gives me a couple of hours in the mornings to work on things and it’s dark by the time I get home.  Add to that copious amounts of wind and rain and you can probably see why I had issues.

I finally just braved the weather and started it.  I was an hour away from being finished and I had to get ready for work.  Luckily, they let me leave early that day and there was still light out when I got home.  I did have to work a little while in the dark, but other than one strand of lights, I finished it in a day.

I actually spent more time cleaning everybody’s junk off of the porch than decorating it!  And that strand of lights–I bought a set and they worked for a few days.  As of last night, all of my porch lights are out.  *sigh*

Despite that hiccup, the decorations still look adorable and I really wanted to share them with you.  Since you can’t be here with me, I’m posting pictures instead!! 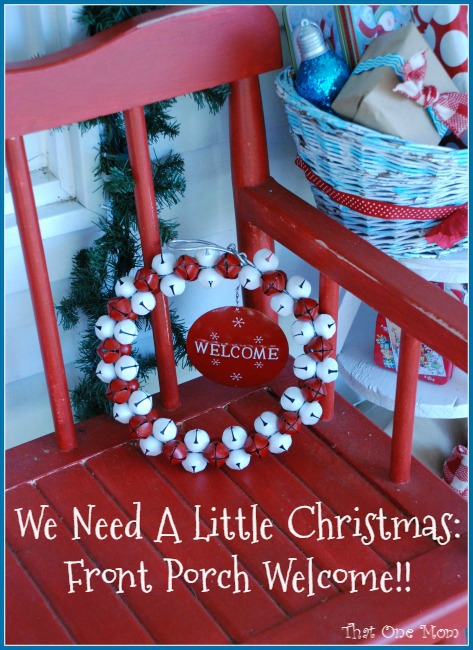 The goal, again this year, was to use as much of what I have to decorate with and buy as a little as possible.  I already had it in my head that I wanted to use the red and blue hallway theme from last year, but the furniture and accessories outside are a little different.  Luckily, the red bench was already out there and the formerly green bench got a paint job over the summer!  The only things I actually bought were the light bulb picks behind the barn star and the swirly red picks in the tree.  The rest of the decorations came from around the house. 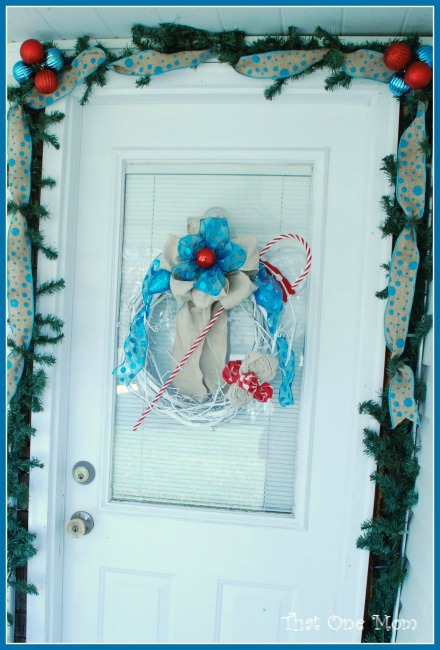 This is a wreath we used on the door last Christmas.  There used to be a giant green “H” on it, but I just took that off and added some blue ribbon, some red and blue ornaments, and the candy cane.  Not bad for a five-minute job! 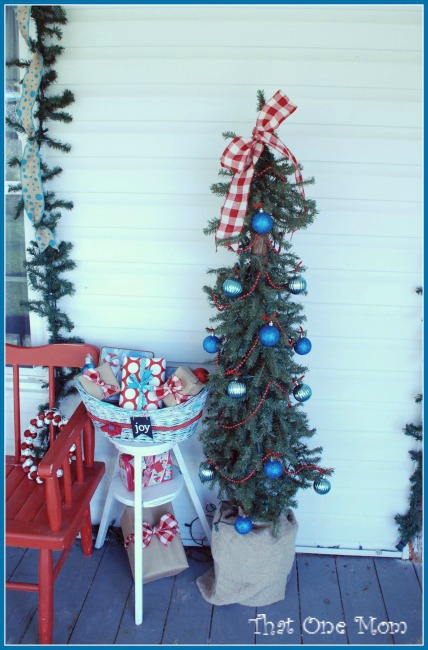 This little tree was already outside.  It’s sitting down inside of an old popcorn tin, but I didn’t like the color, so I covered it with burlap.  The ornaments and ribbon were on the trees in the hall last year.  The basket and the little mailbox came from there as well.  There are a few ornaments in the basket, but they are plastic.  That way, if the wind is too fierce, I won’t have to clean glass up off the porch floor!  All of the presents are fake, but they are still awfully cute. 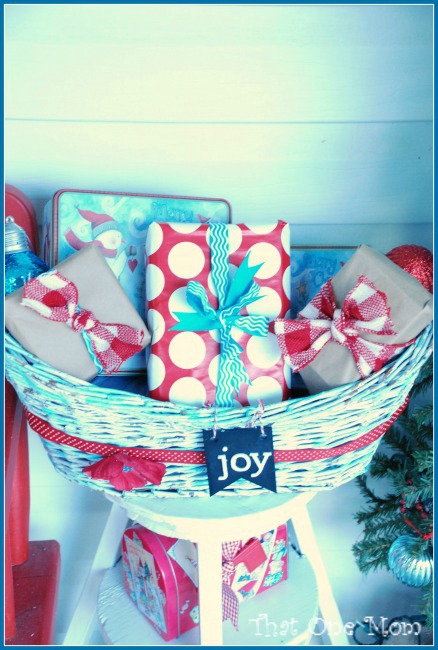 Just a little closer view.  See that polka-dotted paper??  That was an after-Christmas Dollar Tree special.  It had these kind of ugly puppy dogs on the front, but it was reversible and super cheap.  Love me some polka-dots!! 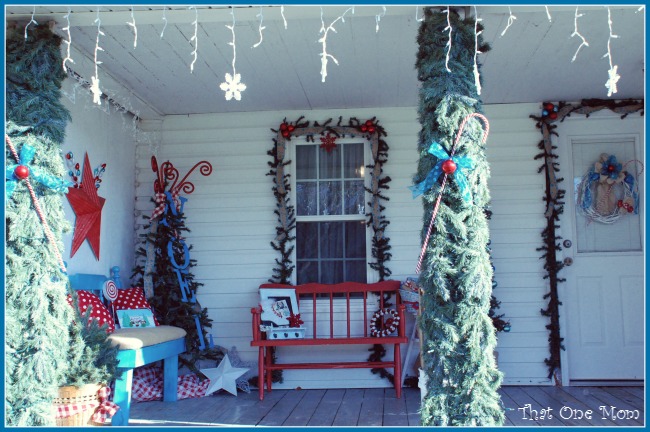 Here’s a daylight view of pretty much the whole porch.  Pretend you can’t see that bucket of tobacco sticks behind the greenery. 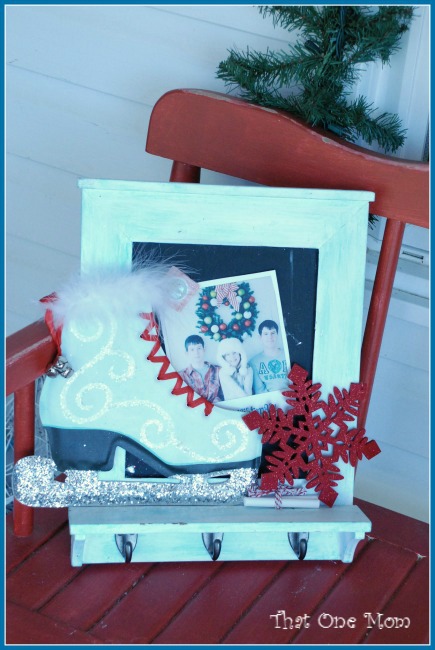 The jingle bell “Welcome” wreath sits in the right corner of my beautiful red bench.  I put my favorite blue chalkboard in the left hand corner, along with a few simple decorations and a picture of my sweet kiddos.  I just keep hoping the wind and rain doesn’t destroy them!! 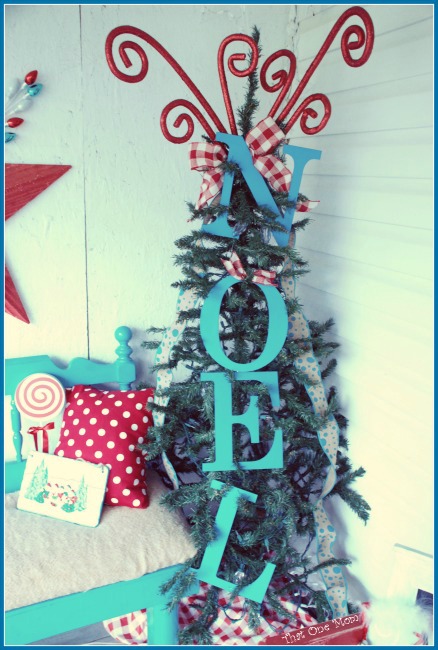 I love this tree!!  I just can’t even begin to describe how much.  There isn’t a lot on it–lights, ribbon, painted letters, and some swirly red picks.  I think that sometimes the simplest things are the sweetest. 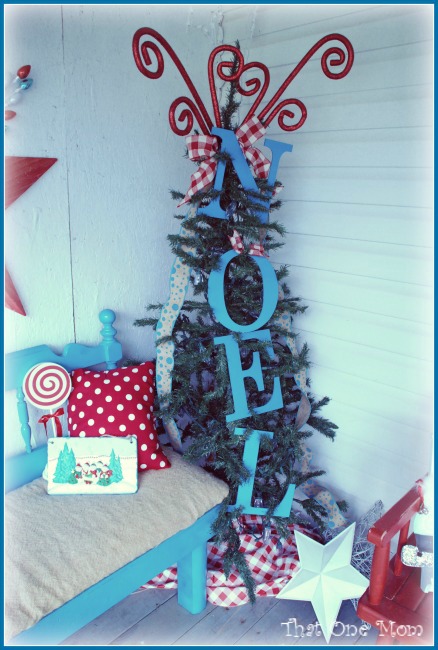 The bench used to be apple green with that red and white dotted fabric on the seat.  The sun totally faded it out though.  I painted the bench a turquoise color over the summer and covered the seat with burlap (nobody ever sits there).  I had some extra red and white fabric, so I just pinned it over some old throw pillows.  Someday, I’m going to learn how to sew pillow covers. 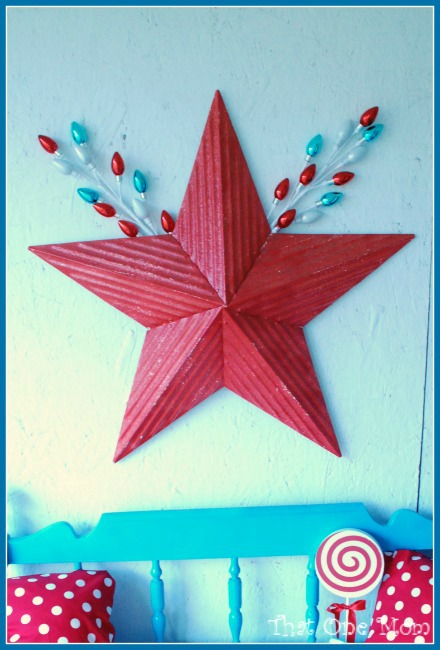 That barn star was an ugly color when I bought it, but I knew I could paint it and paint it I did!  It has been white and it has been red.  I think the red is here to stay.  Those picks came from Lowe’s of all places.  I think they were $3 a piece.  I just stuck them behind the star.  Nope, didn’t even try to wire them to it.  I may regret that later! 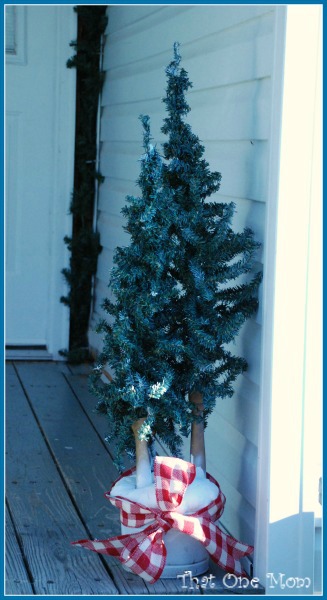 I had these three little trees on a base and I decided at some point to take them off and throw it away.  Last year, I decided that they needed to be reunited.  I found a can of spray insulation in the closet and I used it to keep them in the bucket.  Then I painted the insulation white and dabbed some white on the tree branches.  It is really cute as long as you don’t look too closely.  The insulation is starting to crack, but I’m not sure what to do about that. 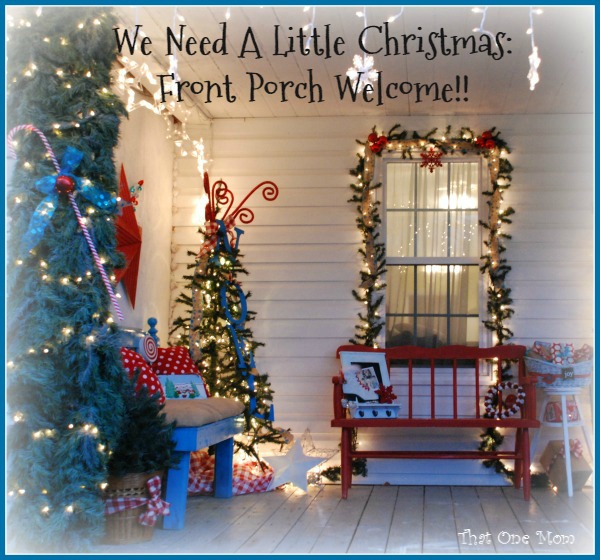 And here it is, all lit up.  Unfortunately, those lights are no longer working.  I’m hoping it’s just a fuse or something, but I dread trying to figure it out.  That really sounds like a good job for the Super Trooper!

Other than the lack of lights, I’m really loving my Christmas porch.  It just makes everything seem so much more festive!

So tell me, do you have Christmas decorations outside?

« Christmas Music Monday: Christmas In the Country
That One Mom 2014 Favorites! »