You are here: Home / The Writing On My Wall... / Police Wife Life Series / What It’s Like To Be Married To a Police Officer (and How To Survive It!): Part 1. You Will Worry.

I have been married for a long time.  Eighteen years to be exact.  That probably isn’t all that long to some people, but if you measure it in Hollywood years then it’s probably somewhere around a century!  My husband wasn’t a police officer when I met him—he was a college student and an EMT—but I quickly found out that being a police officer was a dream of his.

When he finally realized that dream, I had to learn how to be a police wife.  I’m still learning…but there are some things I can tell you that are definite:

People worry.  It’s not unnatural.  What is unnatural is when you worry so much that it sucks the joy out of life and makes you question, over and over, every single decision you make! Don’t let that happen to you.  If you have worries and concerns, asks questions, find people to talk to, or play out the situation in your mind and reason out what options you would have.  I’ve made it through several stressful situations just because I had already thought about how to handle things beforehand.  Of course, we can’t know everything that is going to happen and we do things under stress that we might not do on a normal day.  The important thing is not to let it control your life.  Don’t get your feelings hurt when people tell you not to worry.  They are just trying to be helpful.  Just thank them and go on.  And definitely talk to your spouse.  There have been several times that my husband has had to talk me down off of a ledge of fear!  There have also been a couple of times where he has said, “You watch too much television.”  And once he called and woke me up to tell me, “I’m getting an x-ray on my hand and I’ll be a little late getting home.  I just didn’t want you to worry…” 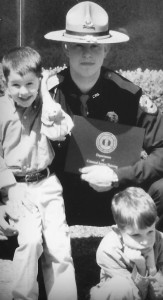 Check back soon for Part 2!

« Chili A La Nan
What It’s Like To Be Married To a Police Officer (and How To Survive It!): Part 2. You Will Get Scared. »