You are here: Home / The Writing On My Wall... / Police Wife Life Series / What It’s Like To Be Married To a Police Officer (and How To Survive It!): Part 3. You Will Get Annoyed.

You Will Get Annoyed.  There will be times when you will question whether you can stand living with someone who is constantly at someone else’s beck and call, whether you want to hear another word about complaints or the department (in our case “post”), or whether you can stand to be in the presence of anyone else who wears a gun and a badge for more than five minutes.  You will get annoyed at the late night phone calls, the family gatherings that are interrupted, and yes, the sometimes lack of attention from your spouse when they are preoccupied with a case or other police problems.  You will also discover that many people will consider your spouse their “own personal police officer.”  This means they will call, e-mail, or stop by to get help with something rather than call the police and report it.

It took me a long time to come to terms with most of this.  And a lot of these things still really, really annoy me.  I got past being upset whenever the Super Trooper got called in while we were right in the middle of something.  Since that part of it will never go away, there is really no sense in being angry about it all of the time.  My favorites are when we are on vacation (usually in a different state) and they try to call him in.  Then I get to make jokes about how none of them ever learned how to read a schedule!  I also got used to hearing police stories all of the time and my husband (thankfully) grew out of wanting to “run by” post every five minutes on his days off!!!

The late night phone calls still give me a mild heart attack.  We don’t get nearly as many and I understand that too comes with the territory.  If you can set rules about that sort of thing, I would highly suggest it.  My husband worked in another county and the dispatchers there would try to call him out when his shift was over, so that they wouldn’t have to wake the Sheriff or his deputies.  I finally told them that I didn’t want them to call my house after midnight and if they needed him, they would have to go through the State Police dispatchers.  The dispatchers from his post generally call his cell phone unless someone just doesn’t know the number.  That buzzing sound doesn’t terrify me nearly as much as the ring of the land line at 3am!!

As for my husband being everyone else’s own personal officer…well, we’ve tried.  A lot of things people ask him to do need to be handled through the proper channels.  Coming to our front door doesn’t count.  For years he went out of his way to help, but that resulted in less time with our family and work that he basically wasn’t getting paid for.  It’s also a little scary for the rest of us, because so many people will see his car and stop for help or advice.  We’ve had some real doozies, I can tell you that!  Trying to help everyone else really wears you down after a while.  Police officers are no different.  They need time off too.  But I don’t have any advice for this other than to be blunt, if need be.  I finally started telling people that he wasn’t working or that they would have to call the police and file a report first.  I can’t tell that it’s made much difference, but you can’t really force other people to be considerate. 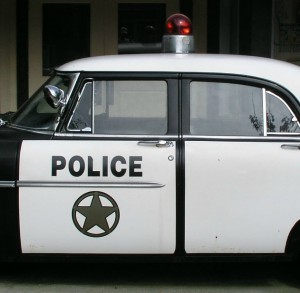