It’s been a bad year.  And not just since the new year started.  For more than 12 months, life has been hard and when life is hard, sometimes there is nothing to do but hold on and pray.

One year and a few months ago, my marriage was in a hard place.  If you are married, you know how difficult it can be sometimes.  If you are married to a police officer, you may know that things can become downright impossible.  I could try to blame it on the long hours, the constant need to be in contact with work, or the missed family events.  The truth is we forgot how to be together.  That just led to one problem after another.  We considered a long separation, but realized that was not what either of us wanted.  We went to marriage counseling instead.  Best. Decision. Ever.  We got our marriage back on track.  I thought the worst was over.

My daughter was stressed out at school and started pulling out her eyelashes.  My youngest son had some worrisome health problems.  My oldest son moved back home (good news for us), but brought his girlfriend with him because she had no other real place to go.  My husband had problems with someone at work.  He thought it had been worked out.  That we were a mess is an understatement.

In the meantime, I was having problems with my hands and arms.  I went to a chiropractor.  It felt weird.  I went to a physical therapist.  She convinced me to see a neurologist.  I went to my family practitioner.  She ran tests and discovered I was anemic, had practically no vitamin D, and was hypothyroid.  She sent me for an MRI, because it was not likely that any of those things were causing my hands and arms to be in such bad shape.

I couldn’t type.  It hurt to sit at the computer or in the car for long.  I stopped driving because my left arm was so weak, I couldn’t make the steering wheel turn.  Did I mention I’m left-handed?

I couldn’t tie my shoes.  I couldn’t write.  I couldn’t open pill bottles or chop vegetables or hold anything even as heavy as a cup.  I could only wear the clothes that had elastic, because I couldn’t button buttons or zip zippers.

The results from the MRI came in.  They immediately sent me to a Neurologist.

Tumor.  Just seeing that word still scares me.  The doctor thought I seemed awfully “chill.”  I told him it was what it was and I couldn’t change it.  He said those kind of tumors on the spinal cord were rarely cancerous.  He sent me for more MRIs.  Then he sent me to a specialist in New York.

During all of this, my husband got transferred two and half hours away.  He was my lifeline.  He did practically everything for me and to take him so far away while I was sick, seemed horribly cruel and unfair.  He went to meetings.  I sent emails.  He finally had to agree to take a demotion in order to come closer to home.  It was still an hour away, but better than before.  Our families helped out in every way possible…we wouldn’t have made it without them.

We took the trip to New York City.  It’s no fun there when you’re sick, by the way.  The Neurosurgeon was very kind.  He decided it wasn’t a tumor.  It was a cyst caused by something called Chiari Malformation.  I needed decompression surgery to give my brain more room and allow spinal fluid to flow the way it should.  It was a scary thought, but they could do it closer to home so that was a relief to me.  And they were pretty sure it wasn’t a tumor.  How many more times could I repeat this to myself?

I was terrified before my surgery.  I prayed more and read more scripture than I had in a long time.  I cried constantly and I tried to discuss things with my husband.  He just kept telling me it would be okay.  I kept telling him I wanted him to be happy, but not to remarry until our teenage daughter was out of the house.  I can be a little selfish I guess.

My surgery came.  It was rough, but not nearly as bad as I had dreaded.  My nursing staff was amazing.  Friends and family visited.  I spent a couple of days in the hospital and then came home.  My husband was off work for several weeks.  My Momma stayed for a while and between her and my mother-in-law, I ate really well!

Recovery has seemed slow to me, but according to some of the things I was told and that I’ve read, I’m doing fairly well.  I’m grateful, at least, for how far God has brought me.  I know everyone doesn’t believe, but I’ve seen enough in my lifetime to have complete faith that there is a God.  One of the doctors even told me that he was amazed because in a surgery that can be a little tedious, it was like there was an extra pair of hands holding the layers apart.  Our family knows whose hands those were.

I also believe that there is a devil who was heaping all of this on me and my family at once.  We are refusing to give in and praying for a hedge of protection is a daily thing for me.  They say that the enemy will fight you hardest when he knows you are going to do great things.  I’m counting on great things for my little family very soon!

For now, I am focusing on daily blessings and victories.

My oldest son is still home.  The girlfriend is now an ex.  She isn’t a bad person, but they were both too young and immature.  He has a wonderful new job that pays well and he’s trying to start a side business on the weekends.

My youngest son is doing much better with his health.  He also got a better job and seems much less stressed.

My daughter’s eyelashes are growing back, although she did have a bout with them when she cleaned her room and stirred up the dust!  She has some allergies that she needs to be tested for this year, but I know that part of it was pure stress and nervousness.

My husband still had to take that demotion and he wasn’t treated as well as I would have liked, but I have finally started forgiving the people who caused the problem in the first place.  There is always some jealousy in his job and that’s not likely to ever change.  I finally recognized that some of the decision makers are jealous for various reasons and the original troublemakers are horribly broken.  That’s why I decided to forgive them.  They obviously don’t see themselves the way others do.  I’ve often prayed that they would realize how they hurt my entire family, but I can’t change them and it just hurts me to be angry.  Plus, he’s retiring next year, so I won’t have to deal with any of those people ever again if I don’t want to, so forgiving them seems the best way to go.

There are still problems with my left hand and arm, but I can type for a while.  I have some soreness and occasional stiffness in my neck, but I can sit at the desk long enough to pay bills.  Some days it just about floors me to sneeze or cough, but I can hold a pen and write…it’s awkward, but not nearly as messy as using my right hand! I’m still not driving yet and I have some smaller health issues I am dealing with, but I can do laundry and clean around the house as long as I don’t pick up heavy things.  Some days I ache (rain doesn’t like me), but I can chop some things and cook simple dishes.  I still have a little trouble with buttons and zippers, but I can now tie my own shoes.  Those are all little things, but you don’t realize how much you take them for granted until you can’t do them.

I won’t tell you that I was prepared for all of this.  I won’t say that I’m glad any of it happened or that I even think we deserved it.  I will say that I’ve learned things…about myself, about my family and friends, about God’s grace, about weird medical conditions.

I have also learned more about what I want and don’t want in life.  I’ve learned about forgiveness.  And I’ve learned to be still.

Sometimes when life is hard, that’s all you can do. 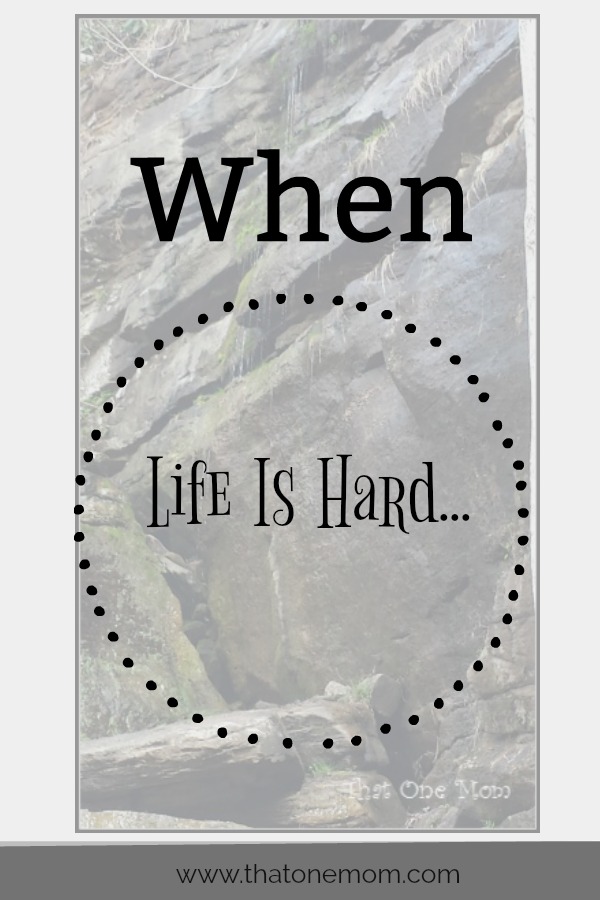